The Naples Players (TNP) are set to launch their 65th anniversary season with Chicago.

Chicago holds the distinction of being the longest running American musical in Broadway history. It features a book by Fred Ebb and Bob Fosse, music by John Kander, and lyrics by Fred Ebb. From show-stopping songs to spectacular choreography, the Tony Award-winning musical is the perfect way to kick of TNP’s 65th anniversary season.

The musical opens in Blackburn Hall on June 28 with a red carpet celebration. 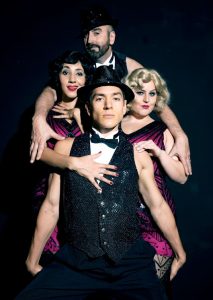 tells the story of two sensational murderesses. Velma Kelly (Jasmine Vizena) is the reigning queen of the Cook County Jail. Roxie Hart (Erica Sample) is an aspiring vaudeville headliner who lands in the clink for murdering her feckless extramarital lover. Both of these scintillating sinners enlist the help of the same lawyer – the charismatic Billy Flynn (Bret Poulter). To win the girls’ freedom, Flynn foments a media frenzy. In the process, these femme fatales are catapulted to showbiz stardom with each vying for top billing.

Jasmine Vizena takes on the role of Velma Kelly, the vampy assassin who is looking to capitalize on her fame to reclaim her star status. “Jasmine Vizena is absolutely a star,” said Broadwayworld of her performance as Sister Mary 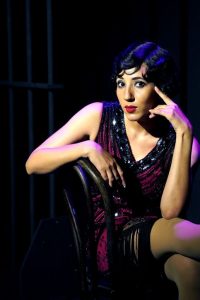 Clarence in TNP’s production of Sister Act The Musical. “I could easily see her performing on Broadway.”

Joining Vizena are two of her co-stars from Sister Act, Erica Sample playing Roxie Hart and Bret Poulter as Billy Flynn. Sample astonished audiences last season with her powerful voice in the role of Sister Mary Robert and is sure to satisfy as the corruptible chorine. Poulter played Curtis in the same production and oozes all the right charm to take on the role of the slick lawyer. 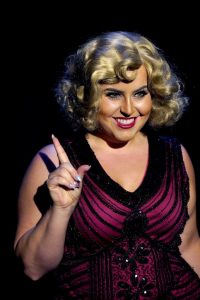 “It’s pure entertainment,” she says, “Most audiences are familiar with the revival that is still running on Broadway, but we plan to utilize the vaudeville roots that the original concept was developed from, giving the show the glitz and glamour of the 20’s.”