The Naples Players (TNP) welcomes all walks of life onto our team of dedicated volunteers.  Some have never been on stage and thrive behind the scenes; some have never acted before and learn from our experienced staff to perform at their best; and then there are others who come to us with a plethora of acting experience.  One such volunteer is Marcus Dean Fuller who is making his first appearance on our stage in The Game’s Afoot.

Lucky for TNP, it’s hard to miss our iconic façade when walking down 5th Avenue South, and Marcus took note.  “My wife, Julie, and I came to see our first show, Blithe Spirit, and we were really impressed.  The whole reason I walked through these doors is also because of The Game’s Afoot.  Besides my 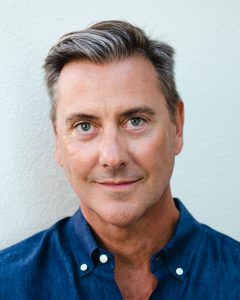 obsession with Shakespeare, I’m a Sherlockian!  I’ve never performed it ever but I love all things Sherlock Holmes and read the books growing up.  It’s a fun dream role for me and it was a surprise and an honor to even be cast.”

Originally from Ohio, Marcus went to the Yale School of Drama and followed that with a career spanning several decades in television, stage, and film.  “I wanted to be an attorney so I originally thought I would go to the University of Virginia School of Law.  I wound up in Los Angeles where I got my SAG card (proof that you’re a SAG-AFTRA actor, protected by full union rights).  I started doing guest spots for TV and film for a number of years (appearances including but not limited to: Charmed, Pensacola, Undressed, and some soap operas as well).  I did Indie films and also started writing and directing for stage. I started a film production company called Compass Entertainment and worked with Susan Sarandon and Brittany Snow (to name a few!).”

Marcus and his wife, Julie, met while they were both at Yale.  Ironically, both are originally from Ohio.  “We met at a coffee shop in New Haven and were married six months later. We both swore we would never marry anyone from Ohio!  We have two kids – Mason and Catherine.  My daughter is desperate to audition and get involved in the kids programs (at TNP).  We’re going to go see A Christmas Carol and Newsies together.”

While the 5th Avenue show posters might have drawn Marcus to The Naples Players initially, it was the sense of family that made him stay.  “Every theatre has a culture which can be bad or really good.  It costs you something to do this work so you want it to be a good experience both on and offstage. I was blown away by the audition process.  I was prepared and ready to do the work and when I walked in and sat down, everyone was chatting and friendly.  After my reading, everyone was so nice and supportive! That’s not the reaction you usually get when other people are trying to get the same role as you – it was really amazing.”

There’s always fun to be had at every step of the rehearsal and performance process at TNP.  During his costume fitting Marcus walked in to find the 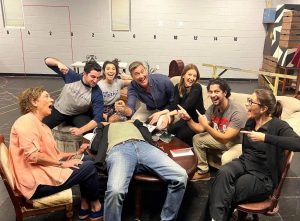 costume shop busy with activity and after getting fully outfitted for The Game’s Afoot, he walked into the hallway and, as he says, “I was run over by 3 or 4 kids on their way to their Newsies costume fittings, one kid was on his phone and looked up at me and just said, ‘You look like Sherlock Holmes.’”

You may still be wondering why someone who was a paid actor for so long would volunteer their time to rehearse and perform at their local theatre. “I’m not doing this for money or upward mobility, I’m doing this for two reasons: company and community.  One thing I’ve always loved is the concept of a company, especially in theatre.  It’s a craft that we learn from those who have mastered it and we have to do it over and over again to get good at it.  To be frank, most people don’t get that opportunity.  One thing I love about TNP is that it harkens back to this old school idea of company – people who are on stage constantly.  They are the fiber of the theatre and they recreate an intimacy that cannot be faked.  In the ‘professional’ world, a lot of times you’re watching two people who barely know each other and they’re going to hedge and we realize what we’re seeing isn’t real. There’s something that happens in a company that’s magic and TNP is actually a company with all of these artists who are compelled to the stage. And, who is the theatre for if not the community?”

Before moving to Naples, Marcus taught Shakespeare and performance at Union College in Schenectady, New York. “I want to teach some classes here – it makes me so happy when I see talent in the most unobvious places (i.e. in young kids or adults who have no acting experience).  It’s just so important to constantly learn and consistently build that (acting) muscle.  I would have all of my students audition for shows that I direct and as a director I would know what I’m going to get.  At this point in my life, it’s time to give back and pass the baton to the next generation.”

Overall, Marcus is thrilled to join his fellow volunteers on stage at The Naples Players.  “I’m just blown away and super impressed.  Bryce’s vision for the growth of the theatre – how can you not want to be a part of it?! I’m so honored to be a part of the level of dedication on and off stage” TNP is always delighted to have new volunteers join the fun.  We are thrilled to have Marcus in The Game’s Afoot!