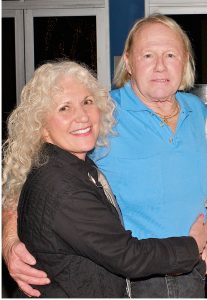 Debron and Harry at TNP

You might recognize our August Volunteer of the Month from our recent production of Mary Poppins where he played Admiral Boom; or maybe he has recently welcomed you into our theater as an usher for Something Rotten!  Either way, we’re delighted to celebrate this great volunteer, Harry McCartney, by sharing his story with you…

Harry was born in Mobile, Alabama but grew up in Japan (yes, he still remembers how to speak the language!) because his father was a civil servant. After finishing college, Harry went into the Navy and was in the Seabee Battalion.  For those of us who don’t know, the Seabee nickname comes from the initial letters “CB” from the words “Construction Battalion.”  While serving in Vietnam, his twelve man team traveled all over the country building shelters for US Marines.

After serving in the military, Harry started his own business as a contractor in Anna Maria Island.  “We built major structures – built the foundation and laid the concrete before building the house or complex.”  Before volunteering for The Naples Players, Harry worked for other important local organizations – a monkey boat captain for the Naples Zoo; a contractor for the Rookery Bay Department of Environmental Protection where he maintained 250,000 acres with tractors, boats, and all kinds of heavy equipment; and he was also a certified nursing assistant.

An important part of Harry’s story is his wife Debron (aka, Deb) whom he volunteers with at The Naples Players. “I met Deb in 1991 and we got married in 1992 – she was a flight attendant at the time.  We just celebrated our 30th wedding anniversary.”  Not only did Deb introduce Harry to volunteering at TNP but they also traveled the world together.  They’ve been everywhere from Moscow to Turkey! 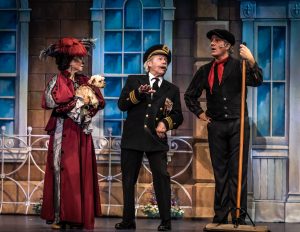 Deb says, “In 2002, Harry and I bought a condo on 3rd Avenue South mainly for the location. It’s walking distance to 5th Avenue South and we knew we wanted to be a part of The Naples Players.  My first gig at TNP was in 2004 when I was cast in Mama Drama in the Tobye Studio where I played several characters.  I knew Harry had a lot of stage presence and couldn’t wait for him to join in on the fun I was having at The Naples Players!  In 2007, Harry was able to volunteer and he was cast in his first show The Smell of the Kill and I was the soundboard operator for that show. It was the first time we were able to volunteer, work, and play together!  We had a blast and we’re still enjoying being a part of TNP ever since.”

All of us at The Naples Players are so grateful Harry received encouragement from his wife to join our theatre family!  He says,  “Deb told me about the theatre – she got me hooked on it! Initially I did Readers Theatre (script-in-hand plays) but I wanted to learn so I tried not to rely on the script too much.  I’ve done just about everything – fly rail, lights, ushering, and backstage hand.  Whenever I wasn’t cast in the show I went and got something else to do offstage. In Fiddler on the Roof, I was a Russian cossack dancer and did all of those tough dances – I even jumped off a table! My all time favorite show was The Producers.  I played six parts and in one scene I went out into the crowd and danced with audience members.  It was a hoot – a lot of fun.” 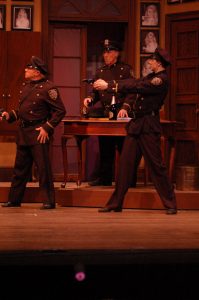 Harry (left) in The Producers

Maybe because of his military background, Harry found himself slightly typecast.  “I did get cast as a cop a lot.  In Oklahoma, I was the sheriff.  In The Producers, I was a police officer.  The only embarrassing moment I had on stage was when I tripped coming in the door in The Producers!”

Everyone at The Naples Players is grateful for a volunteer like Harry and we’re always happy to hear that the feeling is mutual.  “I’ve never had a bad time at TNP.  Everyone is really supportive and it’s just an enjoyable group to be with.  I’ve done 13 musicals here! The young kids have really taken [Something Rotten!] to a whole other level – they are just Broadway.”

Thank you for being an integral part of our TNP family, Harry! Be sure to congratulate Harry on his recognition as August’s Volunteer of the Month.