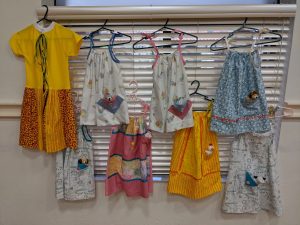 Pillowcase dresses made by Jean for children in Haiti

Jean Snyder has been in the United States for 47 years and met her husband, Jim, when she was a nursing student in her home country of Nicaragua and he was working in a hospital lab at the same nursing school.  At the time, Jean was on the basketball team and Jim was giving away bunches of bananas to the nurses and the rest is history!

Jean was a nurse with NCH for 31 years and only just retired in August of 2020.  Not only is she an essential part of the costume 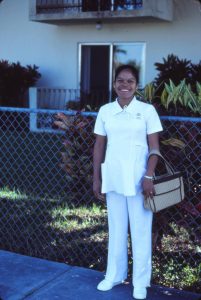 shop at The Naples Players (TNP), but she also volunteers at the Faith Lutheran Church where she makes dresses out of pillowcases for young girls in Haiti.  During the early days of the pandemic, Jean was still a nurse, volunteering at TNP, as well as making masks for TNP and scrubs caps for her fellow nurses.  You are probably wondering…is there anything she can’t do?!

Jean’s daughter, Esther Snyder, was first a volunteer at TNP and then joined the staff.  “She got me to help out with distributing mail at first and then a few years later, in 2017, I came to help in the costume shop with Mary (Wallace) who was in charge of designs at the time.  I learned a lot from Mary.  They made me feel so welcome and I am still learning every day.”

When Jean was younger, she learned to sew from her family. “I started out just sewing by hand and I made a blouse that I wore in high school.  My sister knew how to sew from one of the girls in town so I was able to learn from her and my mom. We didn’t have patterns in those days so you got out your newspaper and cut out whatever pattern you wanted to sew. We used one of those old Singer machines with the foot pedals.”

The Snyder family moved around a bit upon arrival in the US. “We first went to North Carolina where my husband was getting his masters degree in biology.  Then we moved to 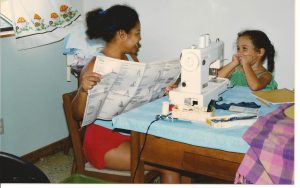 Jean with her daughter, Esther

Bethlehem, Pennsylvania where he’s from and he taught at Moravian College in the biology department for a year. Then we moved to Gainesville, where he did graduate work at UF.  While doing his graduate work at UF, we moved to Homestead because he was doing field work in Everglades National Park. Then we returned to Gainesville to finish his PhD, and then we moved to Ochopee where he started working at Big Cypress National Preserve.  Finally, in 1985, we came to Naples. We moved a lot!” 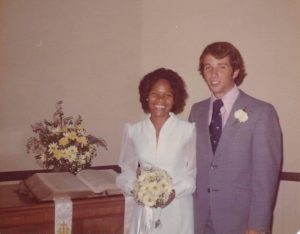 Jean in her homemade wedding dress

Of course, Jean made her own wedding dress in 1975 when she first arrived in the United States and saw snow for the first time.  Jean’s long career in nursing had her in doctor’s offices as well as in NCH on the surgical floor, part of the IV team, in the ICU, pre op, and finally outpatient infusion.  Esther says that Jean always wore her nursing cap, “even two years ago people would say, ‘how will I know it’s your mom?’ and I would reply, ‘she always wears her cap!’” Jean’s daughter Edna now carries on the nursing mantle; the two of them worked together at NCH until Jean’s retirement. 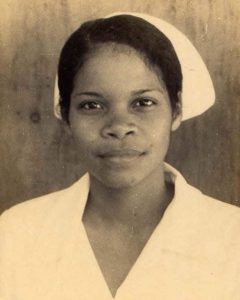 Jean in her nurse’s cap

embroidering name patches which she could program into her sewing machine and let it run in the background.  Nowadays, she is putting in a lot more volunteer hours and has lost count of how much time she put into the costumes for Something Rotten.  She said, “Have you seen the fabrics that we used for Something Rotten? We use the industrial machine for it because the fabric is so thick. Some of the less coarse materials I took home to work on because sometimes the machines are busy here. I guess that was appreciated (by the staff)!” 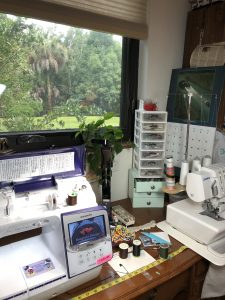 The avid sewer that she is, Jean has a station at home to help with costumes off site. “I have a sewing room at home that was my daughters’ room. If I took something home and maybe I saw that it was cut too big (for example) or something was wrong that I did not understand,  I would send a picture to Mollie (LaTorre) and say ‘is this what you want?’ to make sure I’m on the right track.”

Jean enjoyed working with last season’s costume shop intern Dayne (Sabatos) as well. “He is a great person to go to if you are unsure of something.  He will give me instructions and it’s so helpful. I can always text him and say – ‘is this what you need?’ He’s very talented.” Of course, Jean comes to the performance to see the final product and says, “it’s very gratifying” to see the costumes on stage.

Clocking over 50 hours for Something Rotten, The Naples Players is grateful for a volunteer and person like Jean. Her daughter Esther appreciates having her mom nearby, now that she no longer lives at home. “It’s very nice to be able to go up to the costume shop and say hi to her; sometimes she even packs me a lunch! She used to volunteer at my elementary and middle schools, so having her here at work is like old times. I like to say she was my easiest and best recruit as Director of Volunteers. And I always brag about the work she does!”

We don’t blame Esther for bragging – we appreciate the work you do, Jean, and congratulations on being our July feature story! We look forward to continuing to share stories of our dedicated volunteers through our volunteer of the month features.