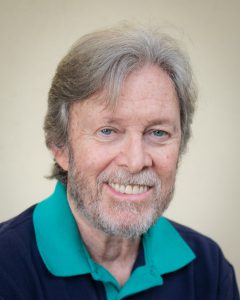 Everyone loves a comeback story! All of us at The Naples Players are delighted that Kevin Kenneally is gracing our stage again in A Christmas Carol, The Musical after a two year hiatus due to a knee injury.  Healed and ready to take the stage, Kevin is thrilled to portray Marley in this classic production!

Originally from Quincy, Massachusetts, Kevin taught high school English and worked for the federal government before retiring to Naples in 2013. No stranger to acting, he auditioned for quite a few films in Boston – even for Ben Afflek’s movie, The Town.  Fun fact, you can spy Kevin in the Tom Cruise movie, Knight and Day around fifty-one minutes in!

Kevin joined TNP almost a decade ago for The Drowsy Chaperone. “I was retired and needed something other than home projects and I had done community theatre when I could fit it in with teaching in Massachusetts. I thought I would try it again.  I auditioned for something in the Tobye that required three accents that I believe were: Russian, Viennese, and Brooklyn.  After the audition, I knew I didn’t have the part but later on, I received a call to play Underling in The Drowsy Chaperone. When I arrived here, I thought to myself ‘this is not your usual community theatre,’ and it has really lived up to that! Dawn and Charlie (Fornara) are great to work with and they’re a part of the reason I keep coming back.  A Christmas Carol was also an opportunity to work with Bryce (Alexander).”

Previous community theatres Kevin worked for were certainly not at the same professional level as The Naples Players. “Usually it was in a school auditorium, it was the director’s 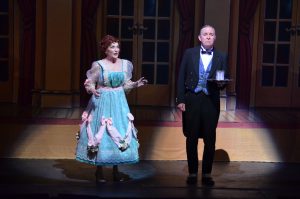 first production, and you only rehearse on Tuesday’s and Thursday’s.”  Meanwhile, at TNP, our volunteers rehearse daily and have significant time on stage to prepare with costumes and lighting before opening night, just as professionals would.

You might be wondering how our actors sharpen their skills when not on stage or rehearsing for a production. Kevin explains that one aspect of The Naples Players to take advantage of in their education program.  “I have taken advantage of numerous acting classes here, taught by Diane Davis.  The educational program has classes for all levels – beginner to experienced actors.  It’s a great way to get started for anyone who wants to get involved.”

Professionalism aside, everyone at TNP wants the volunteers to enjoy themselves first and foremost!  “During The Drowsy Chaperone, I was so comfortable in my role and had a ball doing it! I knew that was because of Dawn and Charlie (Fornara). There is just so much respect between the cast, crew, and staff.  Everyone leaves their egos at the door because anything but camaraderie is not tolerated.  It’s a joy to come here and do a show because you know everyone is going to get along and work hard. Things like that bring you back again and again.” 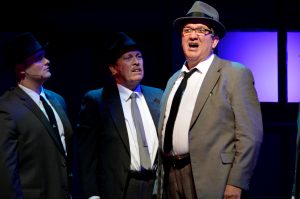 Kevin was cast in Calendar Girls with a herniated disc in his back but was still able to perform.  “I was doing the back exercises that my physical therapist gave me but I was overdoing it.  I looked down one morning and my knee was like a pumpkin – I had a fractured knee and torn meniscus from overdoing my back exercises.  I was on steroids for the inflammation in my back and it turns out steroids weaken your joints.  I had to call Cole (Butcher) and tell him I was getting my knee operated on!”  So, Kevin was out of Calendar Girls and Paul LoPresti (Mr. Fezziwig in A Christmas Carol) was in.  Kevin could not wait to come back to TNP when he was healed.  “As soon as I was cleared by the doctor I thought, ‘I’m doing a show!’”

There’s no need to worry about Kevin’s knee as he goes through rehearsals and performances – his physical therapist says, “motion is lotion” and Kevin added that it’s been really beneficial physically and emotionally” to keep moving. “It’s just amazing the energy and the joy that you feel when you come here – it’s like the fountain of youth for us old guys.  I’m 73 and when I’m here, you could reverse those numbers.  Everyone’s here because they want to be here and they love to be here and they want to put out a good product and have fun during the process.”

Of course, when you’ve taken part in as many productions as Kevin has, the memories are endless.  A particularly funny one happened while performing in The Drowsy 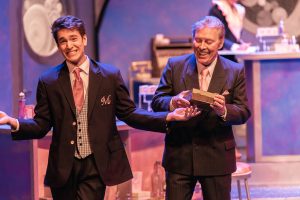 Chaperone.  “There was a scene where Mrs. Tottendale is supposed to spit water in my face when the record gets stuck.  I also had to do the same to her and I couldn’t perfectly do a spit take so poor Mrs. Toddendale was soaked with water every night!”

Present day, Kevin is thrilled to be back for A Christmas Carol, The Musical.  “I’m really excited about playing Marley.  I had a solo in She Loves Me which was great, but this one is a really fun number with a lot of cast members involved.  (After all) it doesn’t work without all of the ghosts!”

We’re grateful for all of our volunteers and are constantly amazed by their dedication to the organization.  Kevin may have been looking for something to do outside of house work but he found a whole lot more than a hobby. “I came here not knowing what I would find. Once I found The Naples Players, I found a home.  You feel like you belong here.  It’s welcoming, it’s inclusive, and it doesn’t matter your background, age, or political beliefs. What matters is: can you contribute to the show and are you willing to work hard?  It’s such a collegial and familial atmosphere here it’s hard not to want to come back. You know when you’ve done something special here, you just feel it.”