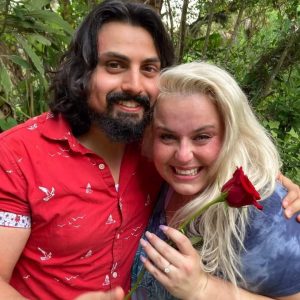 We like to say we’re a family here at The Naples Players and there are many stories to tell about relationships that have started at our theater.  Most recently, two of our Something Rotten! cast members, Adam Fasano and Erica Sample, became engaged.  Not only did the two meet and become friends here, but their wedding will feature lots of TNP regulars as bridesmaids, groomsmen, and even the officiant!

Erica was originally a KidzAct performer and now, when not performing in the shows herself, she assists Dawn (Lebrecht Fornara, Something Rotten! director and choreographer). Erica also directs and choreographs many of the KidzAct performances.  Adam showed up at TNP the first time to audition for The Music Man in 2017 and Erica was teaching the combination.  “He caught my eye because he’s a really great dancer.  At the end of the audition, he came up to me and shook my hand and said ‘thank you’ and I was impressed with his manners!”

The two were just friends for the whole year that followed – Adam says “I was always trying to engage her in conversation and thought she didn’t like me.”  As it happens, Erica had a crush on him the whole time.  Adam was still snow-birding at the time and when he returned to Naples the following season, he was auditioning for Guys and Dolls while she was performing in White Christmas. Adam says, “After auditions I was sticking around to hang out with her and they (the staff) were saying, ‘Adam you can go home, you’re good.’” She then invited him to see her in White Christmas and things really took a turn!

Adam says, “an older gentleman and I were on the waitlist for tickets that night and I remember he told me it was the only night he could see the show.  We were waiting by the box office and they called my name for a ticket.  I was about to give him my ticket because I knew it was the only opportunity for him to go and this gentleman put his hand on my shoulder and said, ‘enjoy your show.’”  As it turns out, this kind act from a stranger changed the course of history for Adam and Erica.  She says, “If he didn’t show up I would have shut him out and not trusted him. Essentially that night we started dating.”

Before they got to their real-life proposal, Erica and Adam played opposite each other in Mamma Mia! as Sophie and Sky. Erica remembers, “Dawn said, ‘you guys are dating and 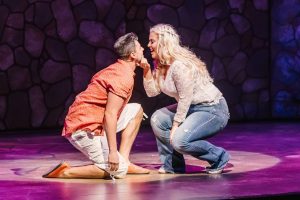 you have no chemistry.’ Sophie and Sky are totally in love and we just weren’t there yet so we were a bit awkward! We were also trying to concentrate on learning the show instead of being in the moment.”  Of course, they got there in the end and Erica says, “it was really fun as he was staying for the summer instead of going back to NYC so we were really excited.  It definitely brought us closer – it was a really special show.  Those cast mates will be at our real wedding because we were so close.”

Fast forward to 2022 and Erica says, “There’s a lot of side stories to tell when talking about our proposal!  I love Dawn and Charlie’s backyard so much, so Adam was waiting for me there after Something Rotten! Teen auditions. My mom and I also own an animal rescue and one of Dawn and Charlie’s neighbors called about rescuing kittens.  I had no idea Adam was waiting for me so I went to go talk to the neighbor and it took longer than expected.  Charlie came by to get me saying to me “she would’ve talked to you forever and ever!” I went back to their house and we took the dogs for a walk to their ‘fairy garden.’ I was not looking cute at all – no make up, leggings, and a bun.”

Finally back on track with the plan, the gang headed toward the garden where Adam was waiting (for what seemed like an eternity). Erica says, “he came out from behind a tree with a rose and said some wonderful things and it’s all a blur after that! Our song was playing and he got down on one knee.”

Obviously she said ‘yes!’ and all of us at TNP could not be happier for this special couple.  Erica says, “If it wasn’t for this place, we would not have met, become friends, and gotten to know each other. After the engagement, we got a standing ovation and lots of hugs from the rest of the Something Rotten! cast!”  Adam adds, “I feel like this place gives people a chance.  I struggled with a lot of relationships before Erica.  TNP opened the door for me to fall in love again.  You’re really surrounded by love everywhere you go here – specifically with Dawn and Charlie, but from the whole TNP family as well.”

Look out for Erica and Adam as Portia and Shakespeare in Something Rotten! this summer – Congratulations to the happy couple!