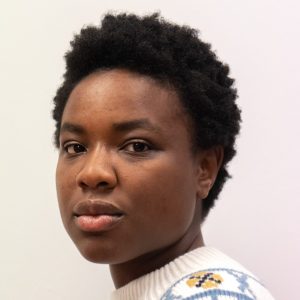 Although new to The Naples Players, Makayla Davis is certainly no stranger to performing. From the age of six, Makayla sang in her church choir and still occasionally performs at the Palmetto Church of God in Fort Myers.

In high school, Makayla joined the choir and theatre program where she received operatic training.  She also received a $500 scholarship for voice lessons with the Fort Myers Symphonic Mastersingers.  “I trained with Candace Sundby in opera singing and competed at the Barbara B. Mann Performing Arts Hall.  I auditioned for Mastersingers every year and got the scholarship every year.  I originally thought I would be a music major.  In school, we did an Ain’t Misbehavin’ musical revue and it was my favorite – just five of us and the whole show was just songs.  I realized that I love high energy characters and it really just clicked with me when I was in that show.”

Makayla changed course and became a theatre major at Florida Gulf Coast University.  This is where she found out about The Naples Players.  “My professor was the one who told me that TNP was having auditions.  I’m so excited about performing in The Cake. I am most excited to meet the other characters.   I’ve seen how I interact with them in the script and, I’m very mean! I’m not normally mean.  I’m excited to play Macy.  I identify with her in a lot of ways and really understand her point of view. However, my mom is very religious and I understand that side as well.” 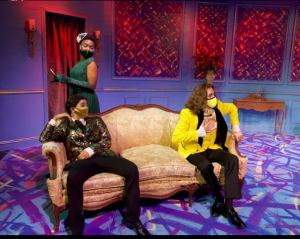 Makayla in “The Misanthrope” at FGCU last year

Feeling a true fit for the part, Makayla says that even the clothes match her own style.  “I can’t wait to be in this role.  Dayne (Sabatos, costume designer) showed me the costume ideas and I was just thinking – ‘that’s what I wear every day!’”  Makayla sees the importance of a play that will start potentially difficult conversations.  “This play is really progressive and moves us all forward to having more conversations. Della is seen by some as the ‘bad guy’ but I understand what that’s like.  I’m queer and am a part of the LGBTQ community but I started out with a very conservative mindset.”

Makayla’s mom also sings in the church choir and came to the US from Jamaica on a basketball scholarship to Texas A&M University.  This is where she met Makayla’s dad who was also playing basketball at the same school.  Initially, Makayla says, “My mom was a little hesitant about theatre but now her and my dad are so excited and supportive.  They always come to see shows.  They’ve never done anything like this (theatre) so I think it was just surprising at first.”

Makayla feels support from all of her siblings as well. “I have four half siblings, three on my dad’s side and one on my mom’s, and one biological brother, Marcus who is my rock, my best friend, and my biggest support.  One of my half siblings also loves theatre and being on stage.”

As far as the future goes, Makayla has big plans for continuing her acting journey. “I’d love to be on stage after school and go to New York City.  Playing a different character allows me to experience the emotions of another person that I would not get to experience otherwise.  I love it and always found a way to perform, whether it was in church or even just for my parents at home. During the Olympics, I would do cartwheels or try to do splits – by the way I am not flexible at all!  Sometimes I would just come in and sing random songs to my parents.”  Clearly meant to be on stage, Makayla will find any and all ways to entertain people and The Naples Players is lucky to have her volunteering in The Cake!

Interested in volunteering? There are abundant opportunities at The Naples Players!  Backstage volunteers have options to commit to time frames ranging from 2.5 to 5.5 weeks.  TNP volunteers are also wearing masks in the building to ensure everyone stays safe and healthy.  For more information, please contact Pamela Larkin Caruso at plarkincaruso@naplesplayers.org or 239 434 7340 ext. 104.