Long-serving volunteer Paul LoPresti has been involved at The Naples Players (TNP) since 2008 when he performed in Cabaret. “My wife was here first, teaching dance classes, 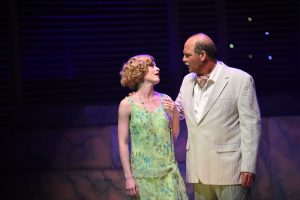 Paul in The Great Gatsby

fundraising, and helping to produce Cabaret. I auditioned even though I have no background in theatre but I always enjoyed it and found it interesting. I’ll never forget my audition…I sang my song and Charlie (Fornara, musical director) was behind the piano and said “Where have you been singing?” and I replied, “In my car for thirty years!”

TNP was delighted to have a new performer and Paul was cast in Cabaret.  “I had a non-speaking part in Cabaret – I was the club owner! I always loved the movie with Liza Minnelli and after that performance, I caught the bug and did a string of musicals at TNP.”

Paul is not exaggerating – he has appeared in more than ten productions here at TNP! Fiddler on the Roof, Hello Dolly, Anything Goes, My Fair Lady, Calendar Girls, Guys and Dolls, The Great Gatsby, and Miracle on 34th Street to name a few.  “What I love about theatre is the camaraderie.  I played sports all my life and it is a similar feeling for me to work together with everyone in the theatre.  What’s great about TNP is that everyone is on the same level.  Everyone wants to do their best and they’re all so nice here!”

By day, Paul is a Wells Fargo Financial Advisor and points out that being on stage is “totally different from my day job.  At work, I am focused on taking care of my clients.  Acting has opened up a whole other world and is a great release for me. None of it has ever come natural to me. I’m good one-on-one with my clients but I used to have stage fright when speaking in front of large groups.  The theatre has helped me immensely with that! I started doing seminars at work and really got to know myself.  Ultimately, I gained more confidence from performing and am much more comfortable in front of groups of people.”

Some might assume that working all day and performing in the evenings might be too much but Paul says, “it’s the opposite of what you might think – my energy levels go up! The adrenaline is flowing when you’re rehearsing and performing.” 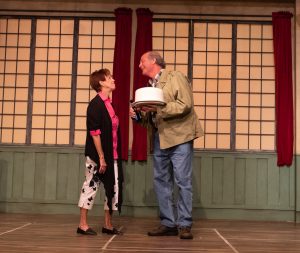 Paul has been in Naples since 1994 when he and his wife moved down from Long Island. He jokes, “Twenty-seven years and I still have my accent – it’s not giving up yet!”  He goes on to say that “it took two visits to Naples and a meal at The Dock Restaurant,” to convince them to relocate.  “It was easy to move my business, I just needed the phone and computer.”

In A Gentleman’s Guide to Love and Murder, Paul will be working with the backstage crew for the second half of the show.  “I’m not sure what I’ll be doing just yet but I like to stay involved even when I can’t audition.  I’m also doing Readers Theatre coming up – I was fortunate enough to be cast. I did Readers Theatre years ago when I took a sabbatical from performing because my business was growing and I needed to concentrate on work.”

Paul wanted to come back in 2016 after tending to his business but he had neck cancer and double bypass surgery within two months of each other.  “My Fair Lady was my first show back.  I had radiation in my neck and I wasn’t sure if I could sing.  I was fortunate to get a small solo in the Cockney Quartet and it was a great comeback show.”

Speaking of My Fair Lady, Paul admits that, “we were in rehearsal and somebody told us there were these cakes in the refrigerator that said “MFL (My Fair Lady)” on them.  Thomas Richardson, a young actor who came through KidzAct and was lots of fun to be around, did a couple of shows with me before and we really bonded.  The two of us ate the cakes and later he ran into the dressing room and said, ‘We ate the prop food!!!’”  Of course, when the subject came up later that night with the director, Dawn Fornara, Paul said, “It wasn’t me, it was Thomas!” 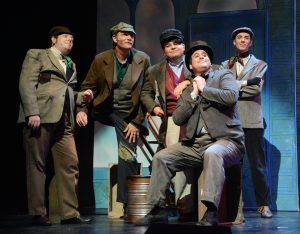 Paul (second from left) in My Fair Lady

A special moment from My Fair Lady that Paul will always remember is, “At the end of the show, Eliza (Elizabeth Marcantonio) has to say ‘goodbye’ to all of us who are playing the townspeople. During the final performance, there was a whole bunch of people crying – it was so emotional.  I saw it in her (Elizabeth’s) face that she almost couldn’t finish her lines.”

Here at The Naples Players, we consider ourselves lucky to have volunteers who are truly a jack of all trades.  Not only does Paul volunteer on stage and backstage, but he is also a dedicated donor and serves on TNP’s Finance Committee. “I was selected because of my background and we handle the overall income statements and balance sheets.  This is a thriving organization with a lot of resources.  We have a lot of great people contributing. Bryce (Alexander, CEO/Artistic Director) is business oriented, fast, bright, and he knows the theatre – he directed me in my first nonmusical, The Great Gatsby.”

Paul thrives in the friendly and supportive community at TNP.  “I just love being around all the cast and crew.  I like connecting with people, everyone here is great, and it’s just an enjoyable time!”