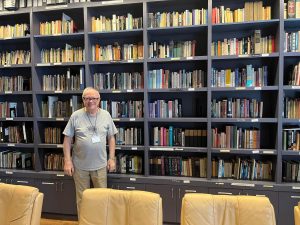 Did you know that The Naples Players (TNP) has one of the largest collections of plays in Southwest Florida contained in its library? TNP used to keep a duplicate of everything in the library, but recently donated the duplicate library to Florida Gulf Coast University.  Of course, someone has to keep track of all these incredible theatre resources – who better than our very own volunteers?! One of whom is Phil Evans, who has a lifetime career in theatre and academics and we can’t imagine a better combination of skills for keeping our library at its best!

Phil has been volunteering with The Naples Players for five years and is a snowbird, spending the other half of his year in Bloomington, Indiana.  “I volunteered for ten years out in Ave Maria but I live downtown so I wanted something closer.  I was looking for something new to do and had always been around theatre and I had worked in a library in Indiana.  No one had ever really organized the scripts before so that was the first thing I had to do and that took quite a while! I finally made a database so everyone would know what was here.  It was great fun for me because it combined all of my skills and I got to look through the scripts and go “oh yes, I forgot so-and-so wrote that play!”

At the age of six, Phil was on his front porch doing performances and continued to do all sorts of theatre throughout high school. “During my undergraduate degree, I studied technical theatre and at one point they needed someone for a role so I had a small part.  I loved it and I was sort of thinking – I don’t want to paint scenery again! (Of course I did go back to scenery painting). I ended up doing more directing than acting – I directed over fifty productions.” 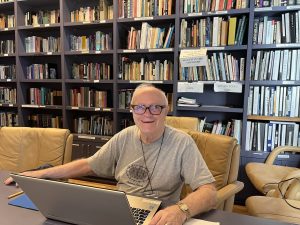 Every year, Phil returns to The Naples Players in November and gets right to work with fellow volunteer, Brenda Rice, to make sure everything is in the right place.  “Some people also give us copies of scripts and I have to make sure those are accounted for in our database.  When I get back for the season, the shelves are usually overflowing so that takes some time to get organized again.  Brenda does the ladder work for me as I can’t enter things into the database and be up on the ladder at the same time – and of course I’m short as well! We usually come in twice a week and the staff are very kind about letting us use the space.”  (The Naples Players’ library is in the boardroom which is used for meetings throughout the day).

Phil also spent almost a decade living abroad in Germany where he continued to follow his theatre passions.  “During the 1960s there was of course a draft – I got lucky and was stationed in Germany where I was able to participate in theatre with the army.  I loved it there so much that, once I was discharged, I turned right around and headed back for Germany to work as a civilian.  I worked for two theatres in Heidelberg and lived in Germany for a total of nine years – three with the US military and six as a civilian.  I loved it but I knew I really had to get back to the States to finish my degree.  I completed my undergrad, then my masters, and finally my doctoral work.”

As fate would have it, the perfect job opportunity opened up for Phil in Illinois.  “At the time, there was a new college, Lincoln Trail College, and they were looking for someone to put together a theatre program.  I wound up teaching there for twenty years – acting, stagecraft, make up, lighting, etc.  After I retired from there, I worked for a rare book library, The Lilly Library, in Bloomington. I went there originally to see if they would take me on as a volunteer and I started out in conservation – learning how to repair and bind books.  What I love about that library is that anyone with a photo ID can get in – a lot of other rare book libraries require you to have a special letter just to get in!”

As far as his time here at The Naples Players goes, Phil says, “just being in this building is home.  The people are very nice to work for and it feels like home here.”

The Naples Players celebrates its 69th Birthday on March 20, 2022 and is grateful for every single volunteer who lends a helping hand, past and present!  If you want to get involved, contact TNP’s Director of Volunteers, Pamela Larkin Caruso, at plarkincaruso@naplesplayers.org or call 239 434 7340 ext 104.