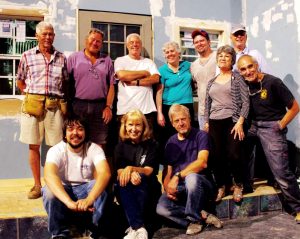 When you watch a performance at The Naples Players, you may be wondering where the beautiful sets and scenery come from.  The answer is – right here in our scene shop! The staff leads some incredible volunteers who physically build everything you see on stage. One such volunteer is our November Volunteer of the Month, Russell (aka ‘Russ’) Loyet!

Initially, Russ’s wife Elaine discovered the fun of volunteering at The Naples Players. “My wife started as an usher and said that there’s all kinds of jobs you can do. So about 14 years ago, I came in for a tour of the theater and they took me to the shop and I thought, ‘this is great!’ It was Becky Troop who gave me the first tour of the theater, and her husband Mike works in the shop with me. He is a comical character – I love working with him! I look forward to coming here and building sets for some of the plays. I built the doll house for Mary Poppins in my garage and the neighbors always ask, ‘what are you building now??’”

Russ has been living in Naples full time for 26 years.  “We came here because my daughter met a cardiologist who bought a practice here. They moved a year before we did and they also gave us two granddaughters.  One granddaughter is in Tampa hoping to get offstage theatre work.”

Russ’s dad opened a shoe store in 1936 and Russ worked there all through elementary and high school.  “I did that for about 10 or 11 years and you really get all walks of life.  People say that you’re your own boss, but really – every person who comes in the store is your boss, and if you don’t treat them right, you lose business!”  Russ also served in the Army for two years and four months (1959-1962).  “I met so many people and made a lot of friends while I was in the service – my wife and I felt like we were at home (stationed in Louisiana) with so many people.  They gave me a four month extension during the Berlin crisis.”

After that, Russ was a machinist by trade and a safety coordinator primarily working at Rush Island plant in Missouri.  Additionally, he had three rental properties and did all the repair work himself.  Needless to say, Russ came to TNP’s scene shop with quite a lot of experience!  “I did know a lot of it already but they bought some nice equipment in the shops.  It’s just like cars – if it’s not updated, it’s no good.  If you put your finger near that table saw, it stops dead! It’s a nice brand new saw.” 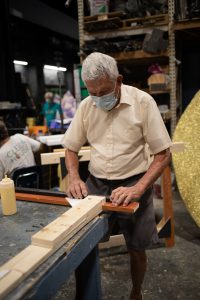 In TNP’s scene shop, Russ does anything from making tables, sets, trim work, painting…the list goes on! “I like spending time with the guys and I do anything I can to help out.” Luckily for TNP, staff member Mike Santos (Resident Scenic Designer & Artist) makes the scene shop an enjoyable experience for the volunteers.  Russ says, “Mike has been great – he’s so knowledgeable and he is good with everybody.  He’s not pushy and if you need any help, he’s right there.  Mike already knew what I could do and put me in a spot where I was comfortable with what I was doing.”

Russ has built so many wonderful things that you may have seen on our stages, but one project  in particular stands out to him. “I remember I built this train set coming out of a tunnel. I built the engine and caboose based on a drawing that Mike did. I was really proud of the caboose – it had windows and a little smoke stack coming out of the top and benches, bunks, and a pot belly stove on the inside. They put it up at Christmas time and I really enjoyed doing that!”

As fun as all of the scene shop work is for Russ, he says, “I think the friendships I’ve made here is the big thing that keeps me coming back – you acquire a closeness and friendship with people here. Day to day and week to week, I love to see the changes as the play progresses and of course the final product. But most of us are here for the same reason – it gets us a little time away from what we normally do.  (For example) On preview night, three to ten couples will go out on Fifth Avenue and then go to the theater together. During the preview, you’re thinking ‘I put this piece here or that piece there,’ and seeing it with the lighting and the sound is just amazing.”

Russ’s time at Rush Island left him with happy memories and lifelong friends.  “When we worked together, our eight-hour day went by so fast.  We joked along with the foreman.  It was a great feeling working with someone like that, and it’s the same way here at The Naples Players.”

Here’s to making friends at The Naples Players! Be sure to congratulate Russ when you see him this month! 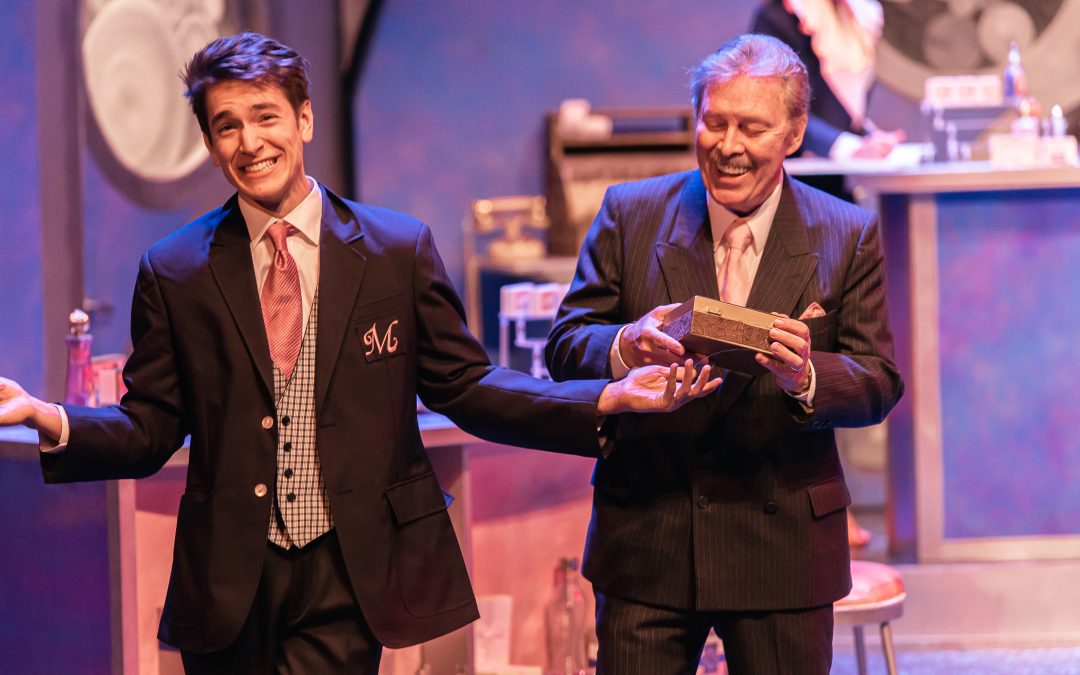 By: Lauren Speirs Everyone loves a comeback story! All of us at The Naples Players are delighted...