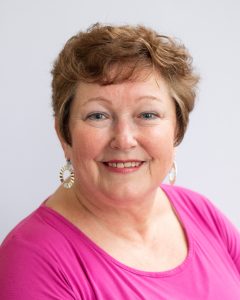 Originally from Twin Cities, Minnesota, Ruth Johnson moved to Naples two years ago and is living in her twenty-third home! With a husband in engineering, she has moved around a lot over the years…

Ruth first appeared at The Naples Players as Grandma Rosie in The Wedding Singer.  “I loved it – it got me out of the house and I loved Grandma, she was such a little smart aleck! And so is Marlafaye (her character in The Savannah Sipping Society).  Marlafaye is one of the four women of a certain age who are having to start life all over again from scratch.  I can relate to each of these characters because I have started my life over and over again.”

Ruth is certainly no stranger to the theatre. “I started doing theatre in 1973 – the bug bit and there’s no going back! I’ve spent the last number of years basically doing every job in theatre.  I haven’t designed lights but I’ve hung them, focused them, ran a spotlight for a week, and built an entire set by myself.”

Her first real professional gig was at the Medora Musical, a 3,000 seat amphitheater.  She was twenty-four years old and the show was sold out for twelve weeks straight.  “People would stop me on the street there for autographs and photos.  When I went back to Minneapolis people said, ‘you stayed where?!’ and had never heard of the place.  Trying to make a living on the stage can be super fun but it’s up and down all the time.  One second you’re thinking you’re all that and then you realize that you’re not!” 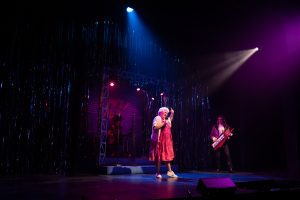 Ruth in The Wedding Singer

From there, Ruth was directed by Mitzi Hamilton in La Cage aux Folles (the play that the 1996 film The Birdcage was based off of).  Ruth explains that Mitzi was famously Michael Bennett’s inspiration, “The Val character in A Chorus Line is based on Mitzi’s real life.”  Ruth also appeared in the 1994 NBC movie of the week, Her Hidden Truth.

Ruth tired of repeating roles in musicals and found herself moving in a different direction in the theatre. “I’ve done a lot of musicals in my day and there aren’t too many parts in a musical for a woman my age that I haven’t done already over and over again. Once I realized this, I moved into directing.”

During rehearsals for The Savannah Sipping Society, Ruth has to fight her director’s reflexes. “This is the type of show I loved to direct – a small production with a lot of slapstick.  We had our first rehearsal and someone asked a question and I had to bite my tongue because there can only be one director! Betty (Nordstrom) is amazing.  All of the women, including my three fellow cast members, director, stage manager (Jules Branche), and assistant stage manager (Nancy Hayer), are so talented.  The process has been cohesive and smooth as silk!”

There’s no doubt about Ruth’s impressive resume in all aspects of theatre, on and off the stage.  She says, “theater is it’s own world.  It’s as if we’re all from the island of misfit toys. It’s my own little world but it’s my tribe and I’m sticking with them!” 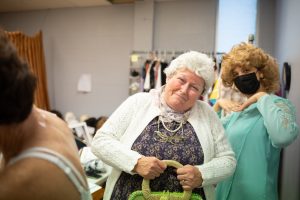 Ruth backstage before The Wedding Singer

Even though Ruth has not been at The Naples Players very long, she is already impressed with the level of professionalism.  “My first impression of a theater tells me a lot and when I walked out of auditions for The Wedding Singer, I had such a positive attitude.  They kept us up in dance auditions for forty-five minutes and one of the other dancers was Dominic Young.  He was so kind and so sweet and I was really impressed with someone his age to give so much sympathy to someone my age.”

For Ruth, It doesn’t end with the audition process, she was amazed from start to finish.  “Dawn (Lebrecht Fornara, director and choreographer The Wedding Singer) and Charlie (Fornara, musical director of The Wedding Singer) were fabulous to work with and Cole (Butcher, stage manager of The Wedding Singer) is such an asset to this theater. I’m so grateful to Dawn and now Betty for giving me the opportunity to earn the respect of others who have been at this theater for well over a decade.  I would love to sit at a table with those people as an equal. I’m hoping this is my forever home theater.” 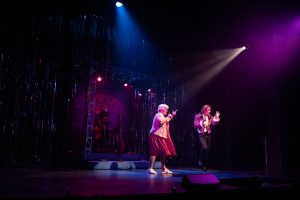 Ruth in The Wedding Singer

The Naples Players is a volunteer organization so everyone you see on stage is donating their time to their community (as well as your ushers, bartenders, and everyone you don’t see in the backstage crew).  Ruth still insists that “professionalism is an attitude, not a paycheck so I still call it work because I’m committed to it and I want to do a good job.”

“I love it here.  The fact that so many people have been so supportive is just wonderful and everyone gets along. In the eight months since walking in these doors for the first time, I have fallen in love with everyone here.  In fact, I look forward to watching my grandchildren grow up on TNP stages.”