Jack Cole volunteered with Mary Wallace in the costume shop at TNP for six years before Mary moved away to Virginia.  Reunited for the upcoming costume design of Boeing Boeing, the pair was eager to sit down together and reflect on their shared experience with The Naples Players. 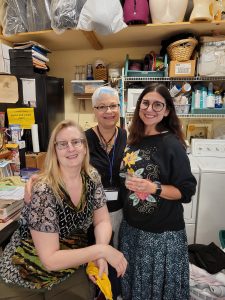 In 2008, Mary Wallace’s daughter was in A Christmas Carol with The Naples Players.  “I wasn’t going to drive back and forth from The Estates every night so I said – ‘put me to work!’  I volunteered and then eventually became a staff member.  For three years, I was the Shop Supervisor before I moved to DC because of my kids and grandchildren.  This was the hardest place we’ve ever moved from!”

Since moving, Mary has costumed two performances at the Little Theatre of Alexandria.  “It’s so nice to be back (at The Naples Players) for Boeing Boeing, this is such a special place to be.”

Jack Cole had just retired when he moved to Naples nine years ago.  “We moved in June and (he jokes) by mid-August my wife was tired of me being at home! She said – ‘Look at the theatre, you could probably help them with costumes.’  I did costumes for my sons’ plays in schools and always did their Halloween costumes.”  Jack laughs as he recounts, “Our neighbor down the street used to say – ‘I hate you because you’ve got the best costumes on the block!’”

As far as experience goes, Mary says, “I’ve been sewing since I was a kid and always loved theater. I have a degree in Theater Arts and my girls were very involved. I would do costumes for their shows.  My youngest, Bridgette, was involved with TNP and was nurtured, really disciplined in a good way, and really encouraged.  Bridgette is still involved in theatre and still on stage.”

Jack was the first male to volunteer  in the costume shop. Mary jokes, “We were a bit skeptical at first!”  When asked how many shows they’ve worked on together they laughed.  “We worked six years together. Not including KidzAct performances, that’s nine productions a year…A total of 54 productions!”

Reflecting on the camaraderie they experienced during some of their more challenging productions, Mary says, “the team was incredible during My Fair Lady and The Music Man.  We stayed late and came in early.  My Fair Lady was particularly intense but very rewarding.”  Jack added that, “one actress who played Mrs. Higgins said ‘you made me feel beautiful!’”

“My Fair Lady was my favorite,” Mary says. “There was so much collaboration with the volunteers.  They were so ready to step up to the plate creatively.  We had a hat workshop 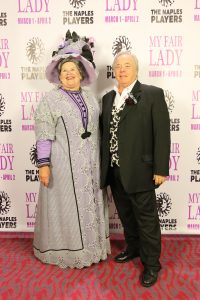 and we said to them ‘here’s the picture and just go create!’ To see the collaboration was magical.  We were all so proud.”

When working with TNP’s team of volunteers, Mary says, “I love seeing someone be able to create something that belongs to them.  As a designer, we have final oversight but for a massive show it’s really more of a ‘you feed me, and I feed you’ dynamic.”  Mary explains that, “To think of every single detail yourself would be much less rewarding.  It’s great to have a broad brush and let someone create within that.”

As far as preparing for each production goes,  Jack and Mary explain that they read the script – a lot .  “I want to know about the themes, who are these people? Is there anything special that I need to know about?  What texture and colors are present in the story? That will help me to inform what I put on them.  Then there’s tons of research and gathering pictures and then just letting it sink in.  I usually wind up reading the script five or six times.”

There are details that really stand out to an audience that they keep in mind when creating.  For example, Mary says, “color is a very evocative emotion.  The audience makes an immediate judgment of who they are when they see the color of the costumes.  Sometimes we also try to trick them (the audience)!”

As with all things theatre, there are always last minute changes.  Jack says, “Sometimes you get them on stage and realize it just doesn’t work.”  For example, Mary reflected on a last minute conundrum during The Music Man, “We made this beautiful gown but it just washed out to grey on stage – we couldn’t leave that.  It was a pivotal moment where she’s supposed to be incredibly beautiful and the gown was just – blah! I just made a completely new gown.  I got close to what I had in mind and she (the actress) looked gorgeous.” 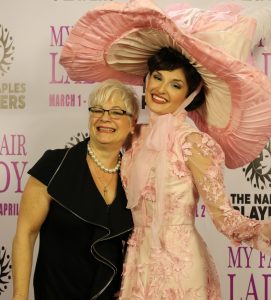 Both Jack and Mary applaud Dot Auchmoody, TNP’s Resident Costume Designer, for her amazing organizational skills and management.  Jack says, “The way she’s organized how you set things out for volunteers is amazing – the actors know where things are and so do the costume shop volunteers. It helps her and Mollie (LaTorre, Costume Shop Supervisor) that they don’t have to stand over everyone every minute.”

Jack and Mary have about ten people working on Boeing Boeing and say that, “some are regulars and here almost every day and some are here once a week.  We so appreciate the way Dot and Mollie have organized it so that we find where everyone’s strengths are.  Even just ironing or laundry – everyone has a place and they are needed.  A costume might need a few different alterations and one person can do the hemming and another can do a more difficult alteration such as replacing a sleeve.”

Mary goes on to say that, “Everyone recognizes that each person has something important to give and I think that’s a successful volunteer organization.”

Want to join in on the camaraderie in the costume shop? Contact our Director of Volunteers, Pamela Larkin Caruso, today at 230 434 7340 ext 104 or email plarkincaruso@naplesplayers.org.  The opportunity to lend a hand and socialize with your new friends is just one step away!