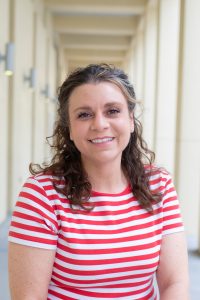 You might recognize long time volunteer, Shelley Gothard, from An Ideal Husband, A Gentleman’s Guide to Love & Murder, or When We Were Young & Unafraid, to name a few recent productions! Shelley has done it all at The Naples Players (TNP) – she’s been on stage, worked as a stage manager, done make-up, sound, and was even an audience ‘plant’ in Rocky Horror.  One summer, Shelley even cleaned the lights in the Tobye Studio.  Clearly, she is willing to lend a hand at TNP!

She is originally from Huntington, West Virginia and moved to Naples in 2000.  To staff and fellow volunteers, she is also the company veterinarian! Shelley has owned Sabal Palm Animal Hospital since 2010 and TNP is, “a break from the real world and my outlet – I make the time to volunteer here.”

As a child in Huntington, West Virginia, there was only one theatre program available and it was provided by Marshall University.  “They did musicals and needed kids for certain roles. Our music teacher took us when I was six years old and I was Gretl and my sister was Brigitta in The Sound of Music.  We did a few more productions with the college and when they didn’t need kids anymore I got really into sports (mostly softball) and in college I worked backstage.”

Around 2010, Shelley arrived at TNP when she was in A Christmas Carol.  “I fell into it because my hairdresser used to be in plays here and it sounded like a really fun thing to do.  I 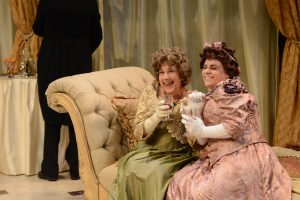 Shelley (right) in An Ideal Husband

love it here – it’s fabulous.  I love the people and look forward to auditions because I get to see people I haven’t seen in awhile and chit chat.  A lot of friends here have really become family as my whole family is in North Carolina.  This is really my home away from home.  I love the TNP Friendsgiving! Cole (Butcher, Production Stage Manager) makes a great turkey and Esther (Snyder, Executive Assistant) always cooks something great.”

This season, Shelley is in Blithe Spirit as Mrs. Bradman. “She’s the doctor’s wife and she likes a bit of gossip – she talks a lot! It’s such a fun group to work with.  We cannot get through the seance scene without cracking up.  We just have a hard time keeping a straight face because we make each other laugh!”  She is reuniting with a few cast members in Blithe Spirit from previous productions.  “I have been on stage with Kathy (Barney, playing Madame Arcati) at Marco Players and Studio Players.  I’ve also performed with Esther (Snyder) in Ripcord at TNP and we have done Readers Theatre together here.” 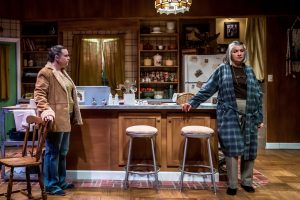 Shelley (left) in When We Were Young & Unafraid

Shelley has definitely been in a lot of our comedies and musicals but she finally cracked into our more dramatic and edgy Tobye Studio productions last season! “It took me eleven years to get into the Tobye at all and the first time I was just comic relief in An Ideal Husband! Even in When We Were Young & Unafraid, I was still kind of the comic relief – I was the militant lesbian who got to fight with Bernardo (Santana – fellow on stage volunteer).  Even though the topic of the show was really serious, we still all had a good time and got along very well.  It’s a worthwhile play and it makes you think.  During the talk-backs (mediated by The Shelter for Abused Women & Children) there were people who had been abused and stayed after the show to talk.  One man said that he wanted to stay but it hit too close to home and he had to leave.  A lot of people got a lot out of it.  Our older audience members could remember this time in history (1970’s) when there were no women’s shelters – there was no one to call for help.  A lot of people thought it was realistic so we thought that was really important to what we were trying to achieve.”

Looking ahead, even though Shelley has done so much with The Naples Players, there are still some personal goals to achieve! “I will definitely audition for The Game’s Afoot – I love an Agatha Christie murder mystery! I’d love to stage manage again and I would also consider directing.  With a full time job, both of those things are too time consuming for me to do at the moment – you’re the first one here and the last one to leave! And, you have to keep everyone in line!” 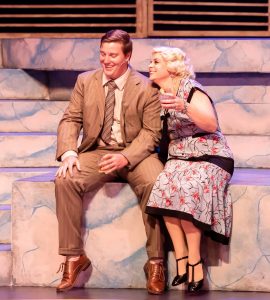 Shelley (right) in The Great Gatsby

With all the memories to choose from, Shelley’s favorite experience was being a part of The Great Gatsby and her favorite show was A Gentleman’s Guide to Love & Murder.  All of us at The Naples Players would like to congratulate Shelley on being October’s Volunteer of the Month and we can’t wait for you to make more memories with your TNP family!