“We feel so fortunate that theater survived Hurricane Ian. We hope the news of our upcoming renovation brings joy and inspires confidence that the city of Naples is not only resilient, but will build back stronger and better than ever before” said Peggy Monson, Board President of The Naples Players. 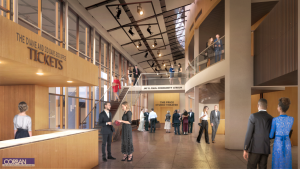 Architect’s Rendering of the New Atrium

The Naples Players’ current home on 5th Avenue South opened more than 20 years ago. Since that time, the programs and impact to the community have experienced significant growth, but the building has remained the same. Invited to build their facility downtown in a partnership with The City of Naples in 1994, The Naples Players was charged with serving the local community in the arts while building downtown into a destination.

Today, as Naples continues its clean-up after the devastation of Hurricane Ian, the theatre has become home to the Small Business Administration’s Emergency Relief Center, which offers assistance to local business owners seeking disaster relief; provided free childcare while schools were closed; and has been welcoming community members who need A/C, Wi-Fi, or a quiet place to work.

Additionally, the theatre has re-opened by producing a production of Blithe Spirit, which was written during a time of deep loss and tragedy during WWII, and was a way to provide audiences with laughter, levity, and escape.

With Naples City Council’s recent approval, The Naples Players intends to continue its commitment to the city well into the future with their renovated facility. “We’re pleased to be an example of community-oriented, community-engaged future planning. We’ve been thrilled to work with the neighbors and the city to design a facility that honors the community’s past, and protects its future,” said Bryce Alexander, CEO & Executive Artistic Director of The Naples Players. The renovated facility has been designed by David Corban, who is known for his work throughout Southwest Florida for other philanthropic organizations including Grace Place, The Guadalupe Center, and The Naples Botanical Garden, among others. 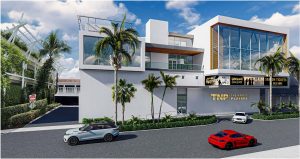 A vast majority of The Naples Players’ project will occur under the existing roofline, leaving the iconic façade facing 5th Avenue virtually untouched. But major exterior upgrades are planned for the theatre’s north side, along 4th Avenue, with the addition of a cantilevered, glass-front Educational Theatre – and bringing a much needed, significant facelift to that side of the street.

Additional lead gifts have been provided by:

“We’re hopeful that the people of Naples will see the importance of a unique organization like The Naples Players, see what it has done for our community, and demonstrate their love and commitment by helping us raise the final $2m needed to complete the project” said Pat Pollok, chair of the theater’s Capital Campaign Committee.

The Naples Players hopes to break ground in April of 2023, with the renovated facility completed in February of 2024. The theater’s programs will continue throughout the community during construction.

For more information, or to donate to the project, please visit: naplesplayers.org/campaign/