Everything you see at The Naples Players today is the result of 68 years of dedicated community collaboration and constant growth. We are at a point in our trajectory that demands an exciting evolution; and we have been here before. Our artists once performed in living rooms, school auditoriums, a storefront theatre, and even a movie theater by the time we arrived at our present location in 1998.

In our forever home – the anchor of downtown Naples – we have continued to grow. The programs that you have so faithfully supported are beyond capacity. Shows are sold out. Classes are full. Revenue and community impact have been capped. We are facing a challenge that we must address together: to remain a theatre for our growing community, we must evolve once more. We are thrilled to announce UPholding the arts…

The future of TNP

Conceptual Renderings of the new facility 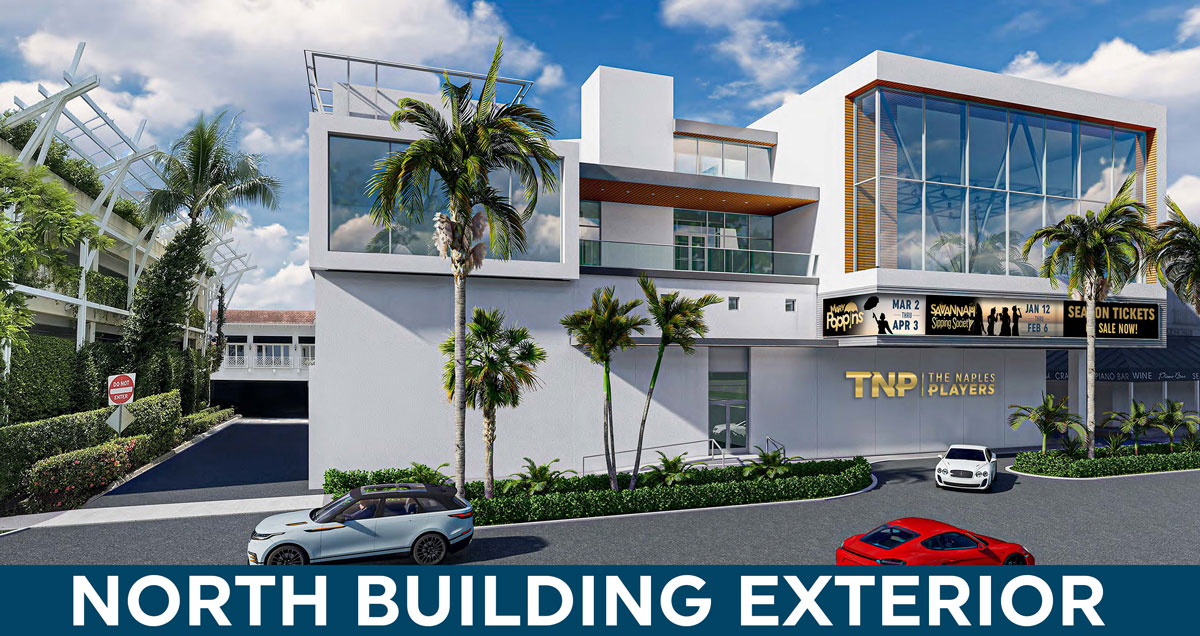 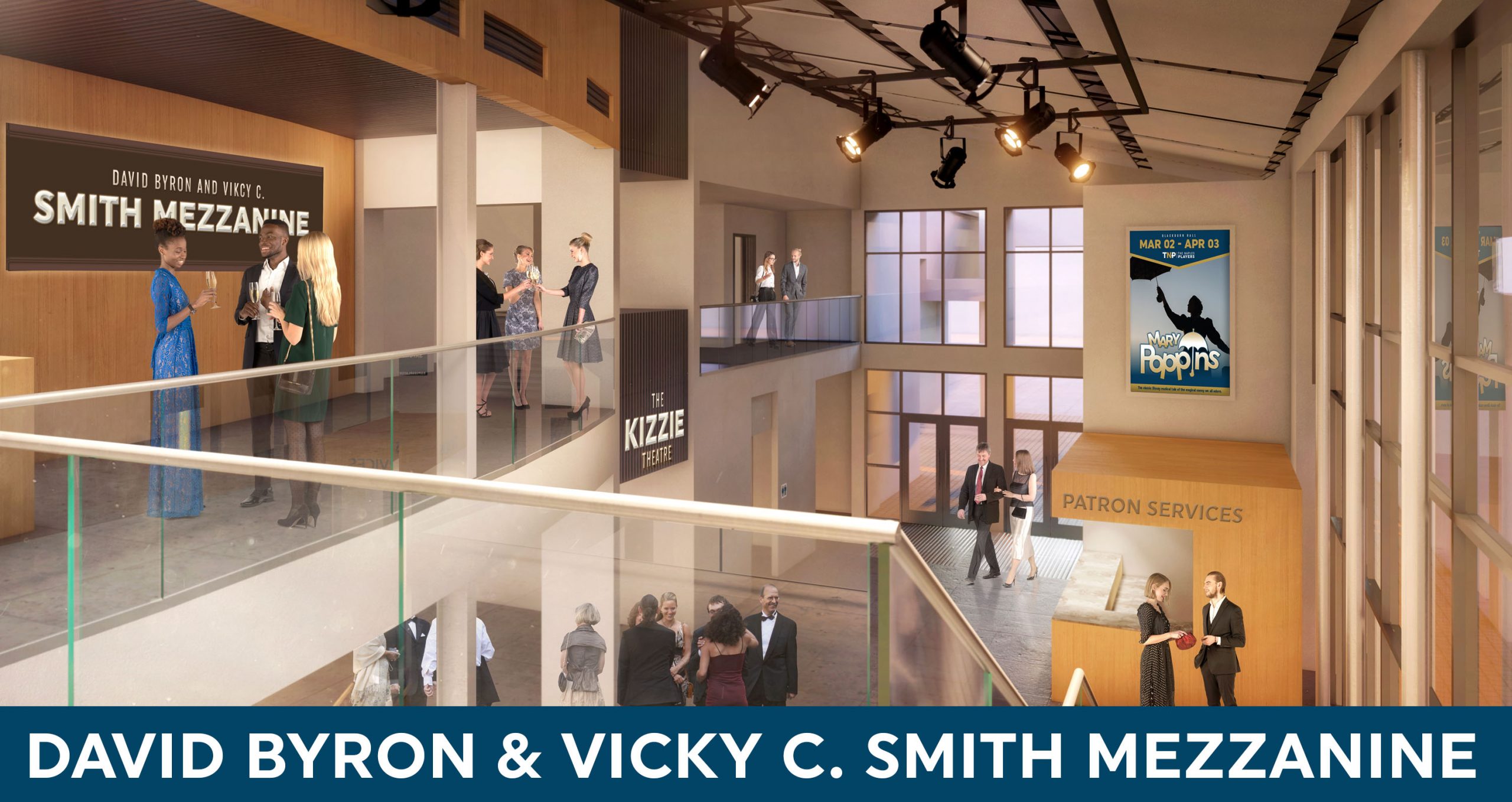 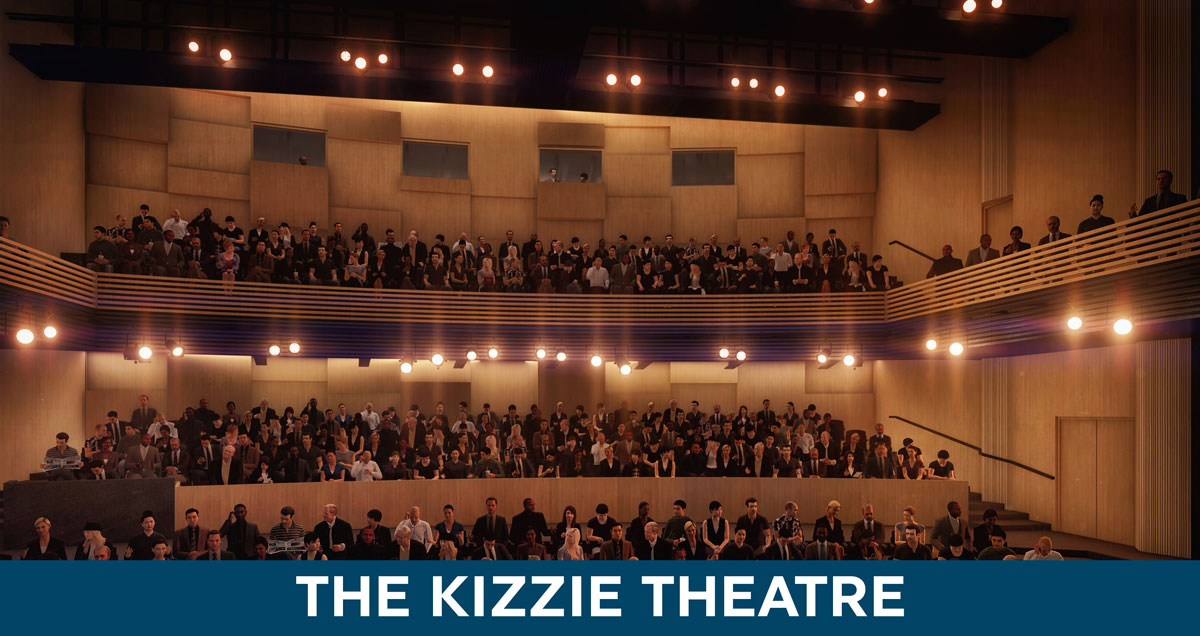 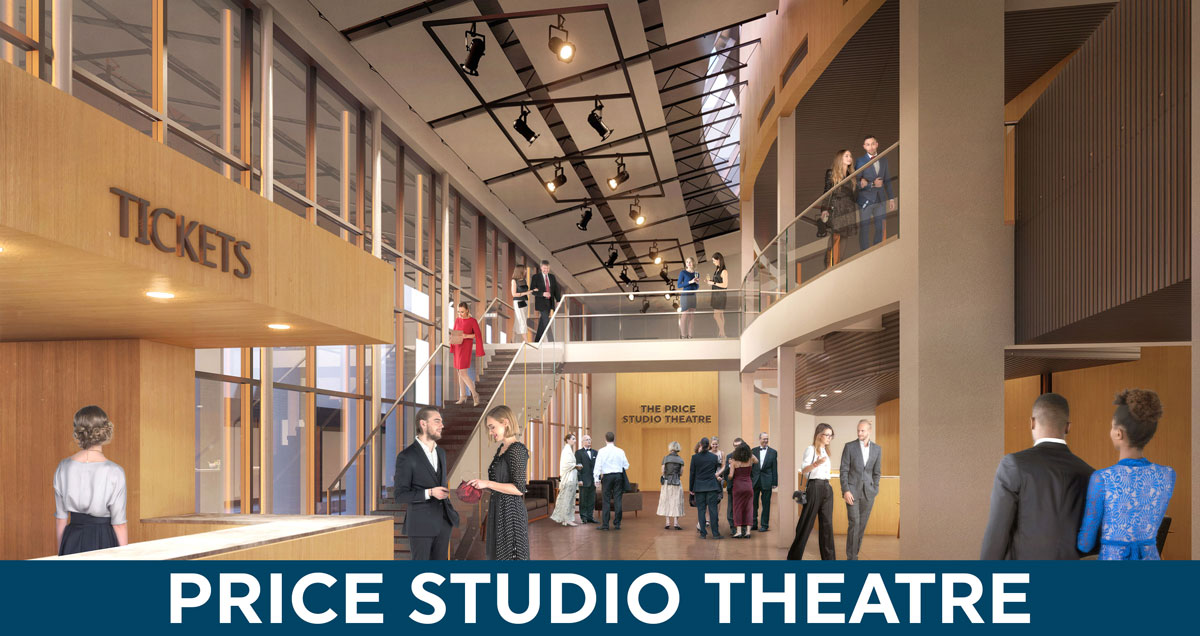 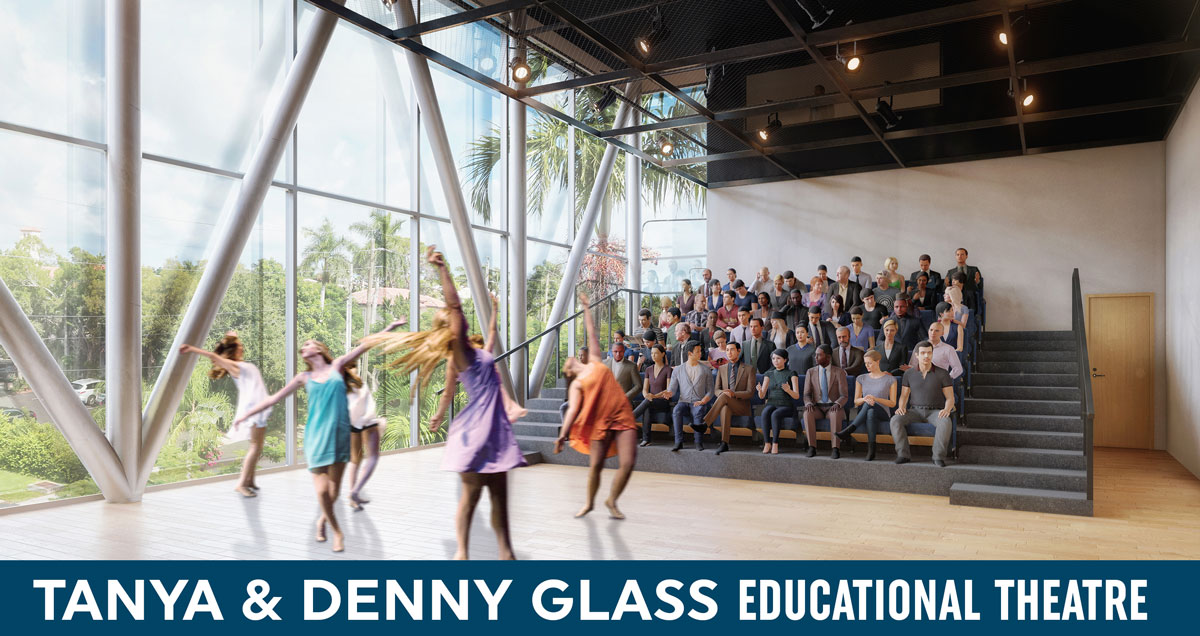 Conceptual rendering of the north side of the renovated facility, including the Denny & Tanya Glass Educational Theatre.

Giving from the heart.

The Naples Players has been defined by dedicated volunteers since our founding in 1953. Even when Naples was just a small town with a population of around 1,500 people, there was a collective recognition of the importance of theatre. As the population grew, passion for theatre grew along with it, and TNP kept pace with the demand for high quality entertainment. As time went on,  our supporters continued to advocate for the arts and give generously of their time. We continue to be an organization that is sustained by meaningful volunteerism. While we are no longer moving sofas and coffee tables to create a performing space, the heart of TNP remains the same: quite simply – our volunteers make us who we are, and they always have.

“I’m grateful for all of the opportunities and experiences I’ve had every step of the way.”

Volunteer Joel Banow, who lost count of the thousands of hours he’s committed to The Naples Players over the course of more than 20 years, speaks for many in his cohort when he observes, “I’m grateful for all of the opportunities and experiences I’ve had every step of the way.” Joel is far from alone in the wide variety of volunteer roles he has held, including as director, backstage volunteer, audio assistant, working in the scene and costume shops, actor, visual display curator, and so much more. Most don’t know that Joel was the director of the CBS News broadcast of the moonlanding, but he finds he can use his experience in the control room to create artistic experiences he deems equally as important for the community.

Despite our theatre home remaining closed for over 12 months due to COVID-19, our volunteer family banded together (while staying 6-feet apart) to continue entertaining and educating our community and lifting spirits through the language of the arts. Below are a few video examples of how our volunteers stayed connected to the arts and continue serving during the pandemic.

The future is now

Beyond the outstanding performances enjoyed by over 60,000 audience members each year, The Naples Players offers our community access to unparalleled performing arts education programs. We serve thousands of students and offer need-based financial assistance to over 60% of our enrollment. TNP is committed to helping each student develop self-confidence and a sense of collaboration, build skills that work towards appropriate goals, and have the opportunity to see the way an arts education has a far-reaching positive impact on many aspects of life outside of the theatre.

Our positive influence reaches beyond our walls: The Naples Players has cultivated 22 highly effective community partnerships to reach students in public schools, and to successfully implement our Wellness Through the Arts Program. Many of these outreach efforts take place off site – at senior centers, recovery facilities, local schools, and even in a barn! All of the aspects of our revitalization project are carefully designed so that our education programs can have maximum impact now and for years to come. 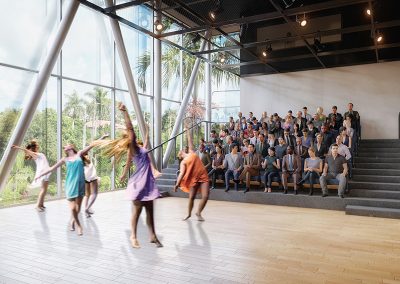 Increase in student enrollment since 2015 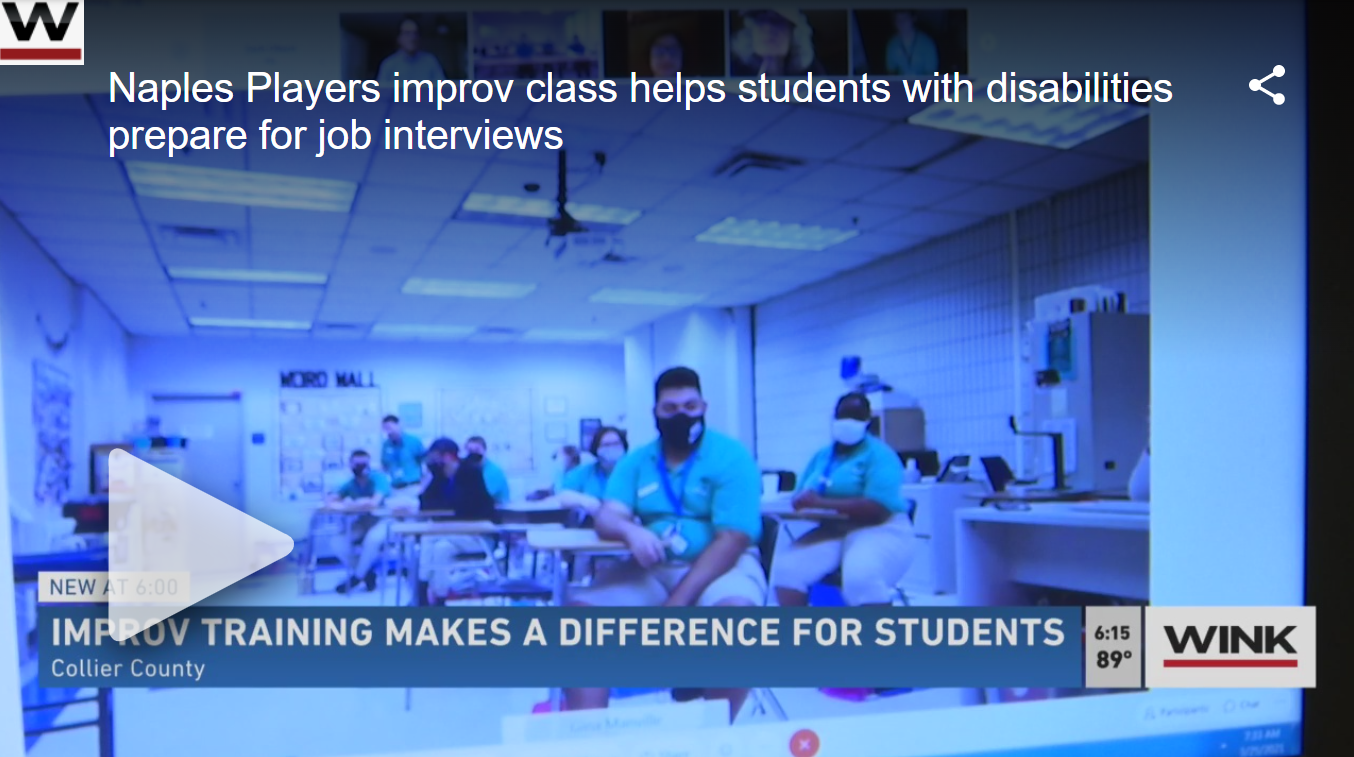 “I left group bereavement sessions to be in an IMPROV group because I found IMPROV to be much more therapeutic:  IMPROV allows expression, allows sharing, allows silliness, allows surprises, allows fun and results in a relaxing catharsis.” 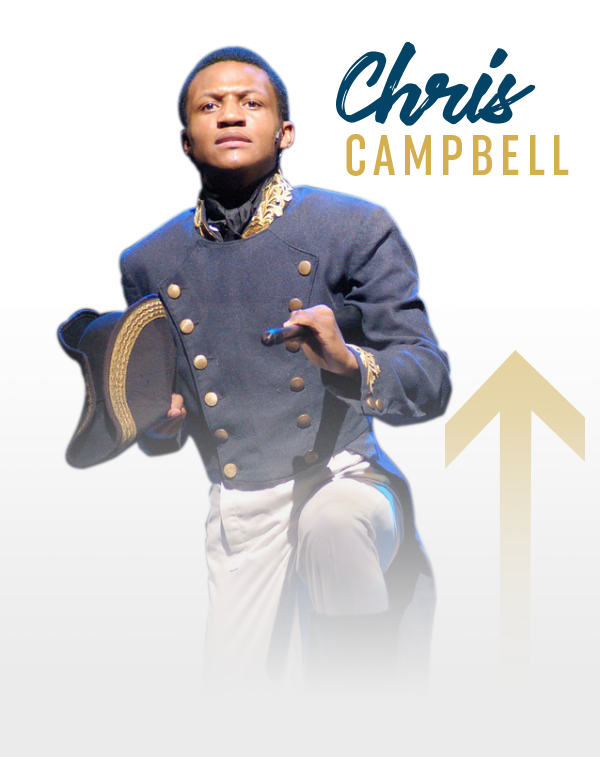 “Without my experiences at The Naples Players, I would not have known this career path was a tangible option for me, just because there is no other program like it here in our community.”

When Chris Campbell hit the stage in Puerto Rico in January as an ensemble member in the national tour of Hamilton: An American Musical, it was the culmination of years of theater experience which started with The Naples Players.
“Without my experiences at The Naples Players, I would not have known this career path was a tangible option for me, just because there is no other program like it here in our community,” he said.

Chris first got a taste of acting as a young boy when he played the part of Dandy Dan in KidzAct’s Bugsy Malone Jr. His talent and work ethic were always apparent, but during his first production on The Naples Players main stage as Warner in Legally Blonde the Musical, it became obvious he was destined for success. “We all turned into this big, crazy family and it just kept growing and growing over the years,” he said. “This is where I got my passion and my love for performing.” 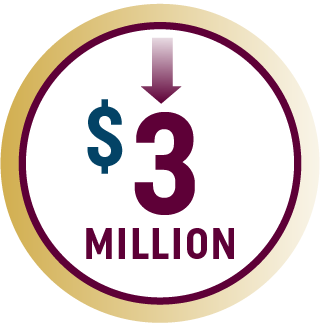 We’re currently limited by $3 million in maintenance requirements which will not add any additional revenue-producing or community programming space. 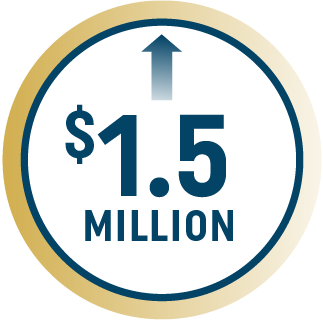 By renovating and expanding, the potential exists for over $1.5 million in additional annual revenues. 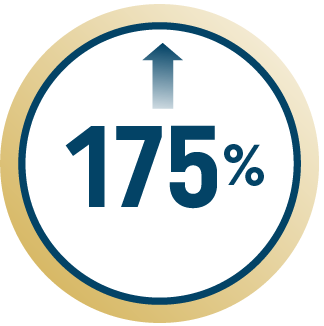 The expansion also allows for a 175% increase in on-site education, readers theatre, and wellness capacity. 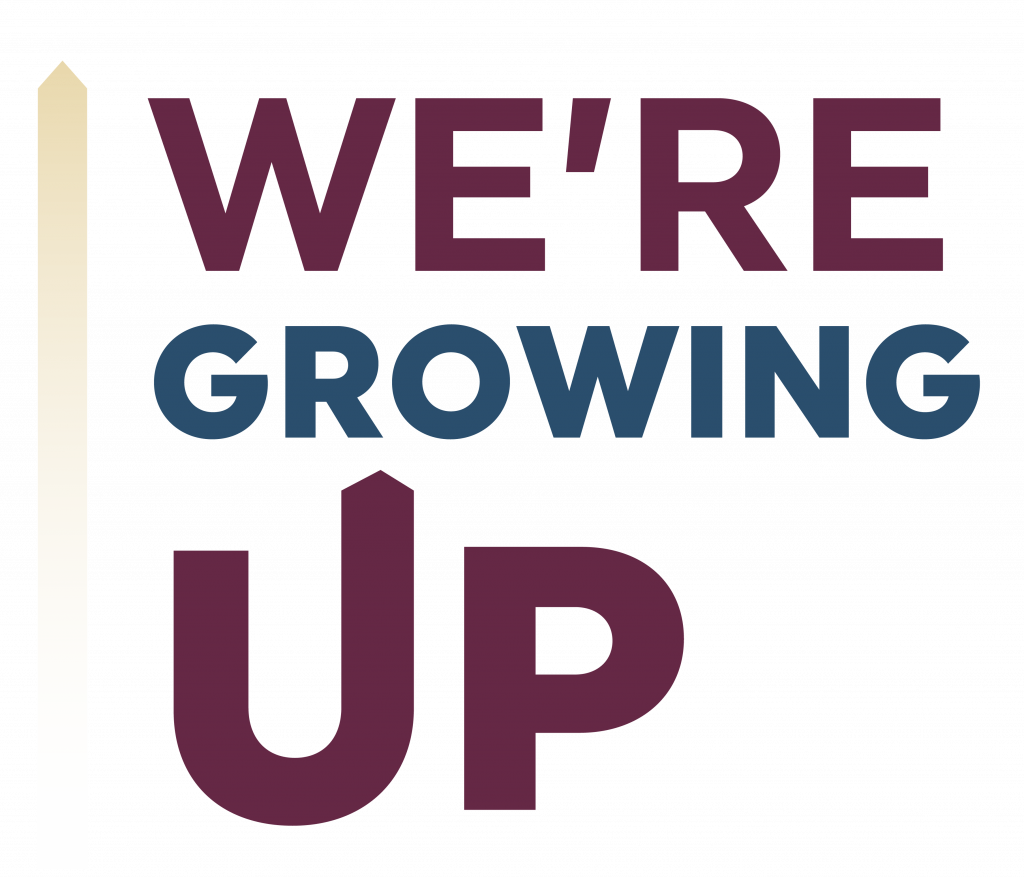 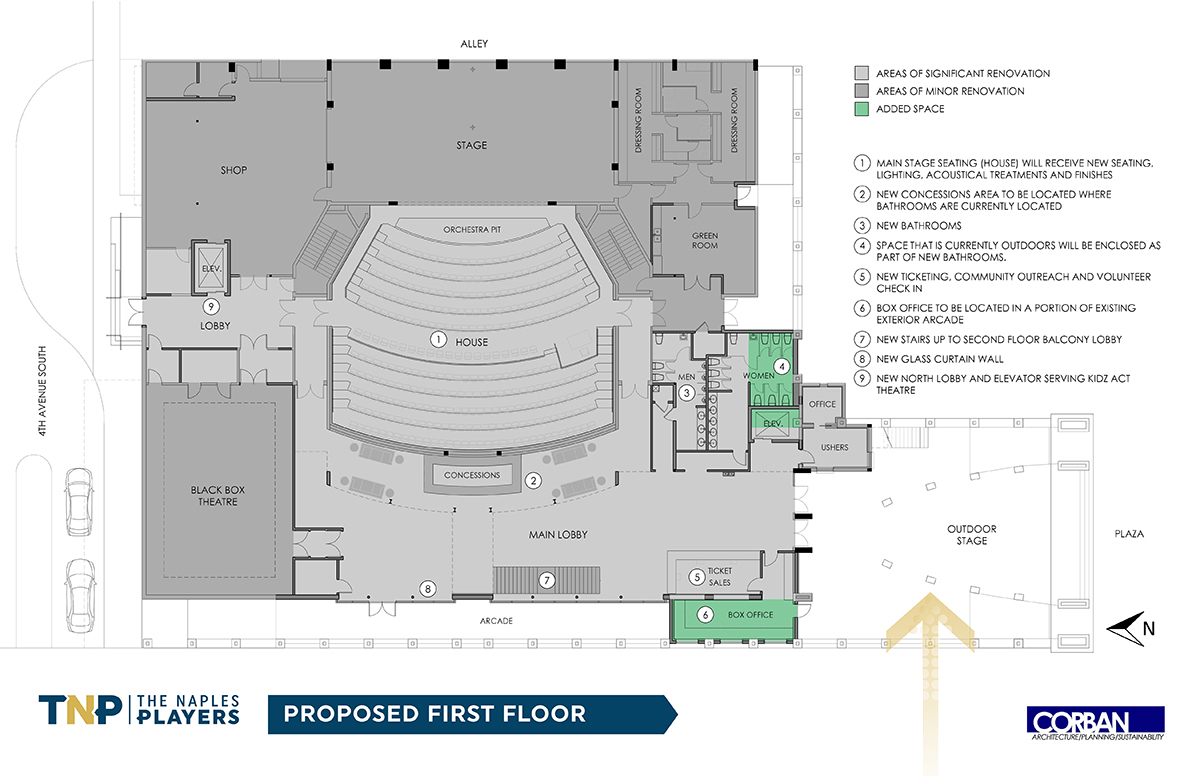 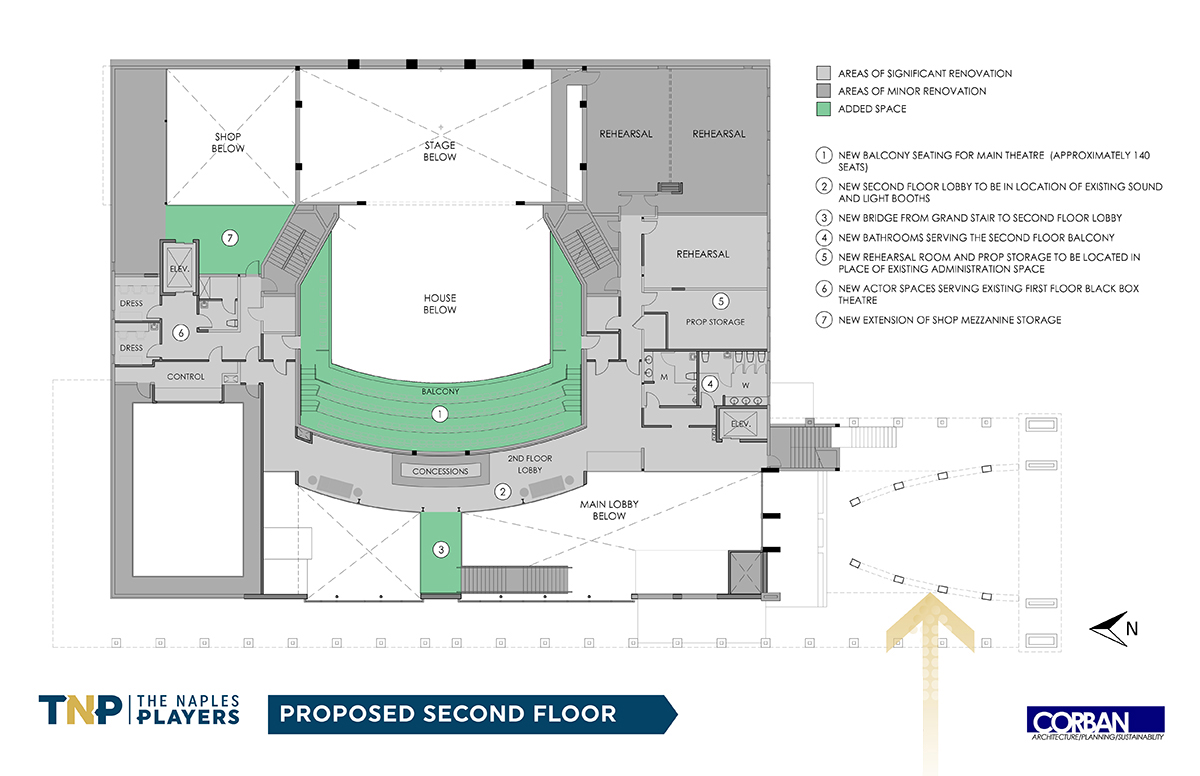 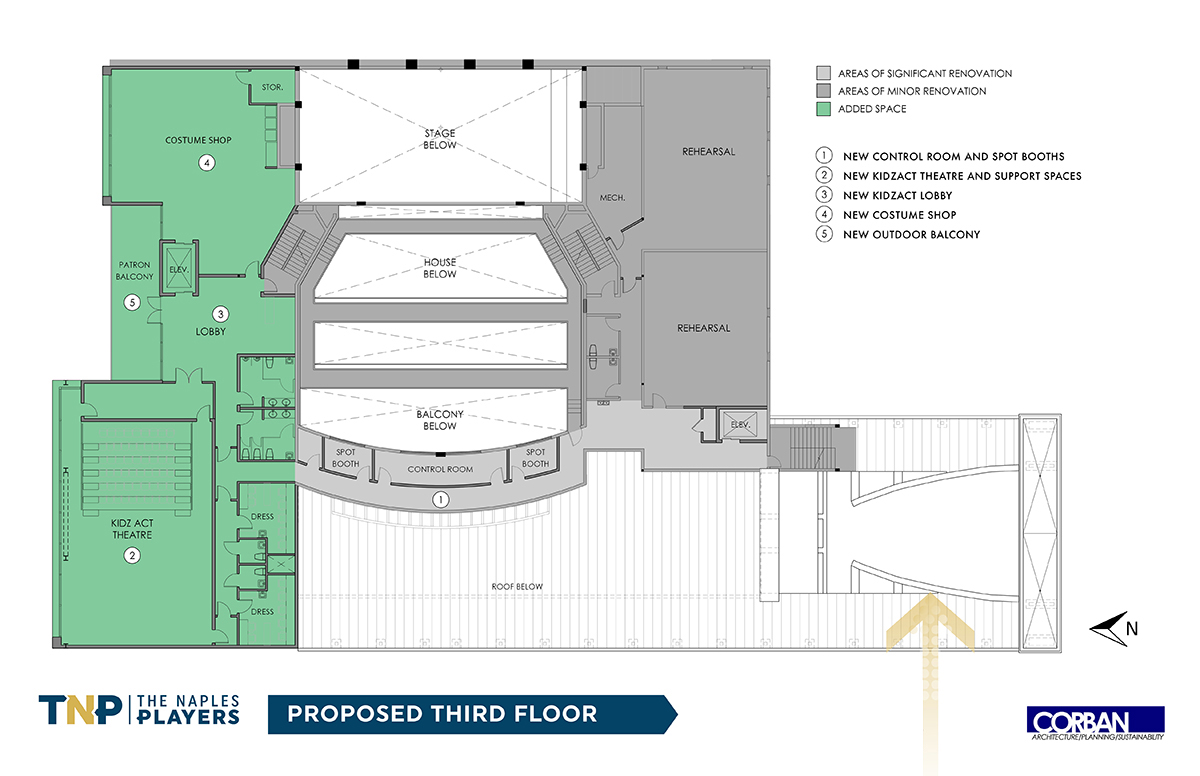 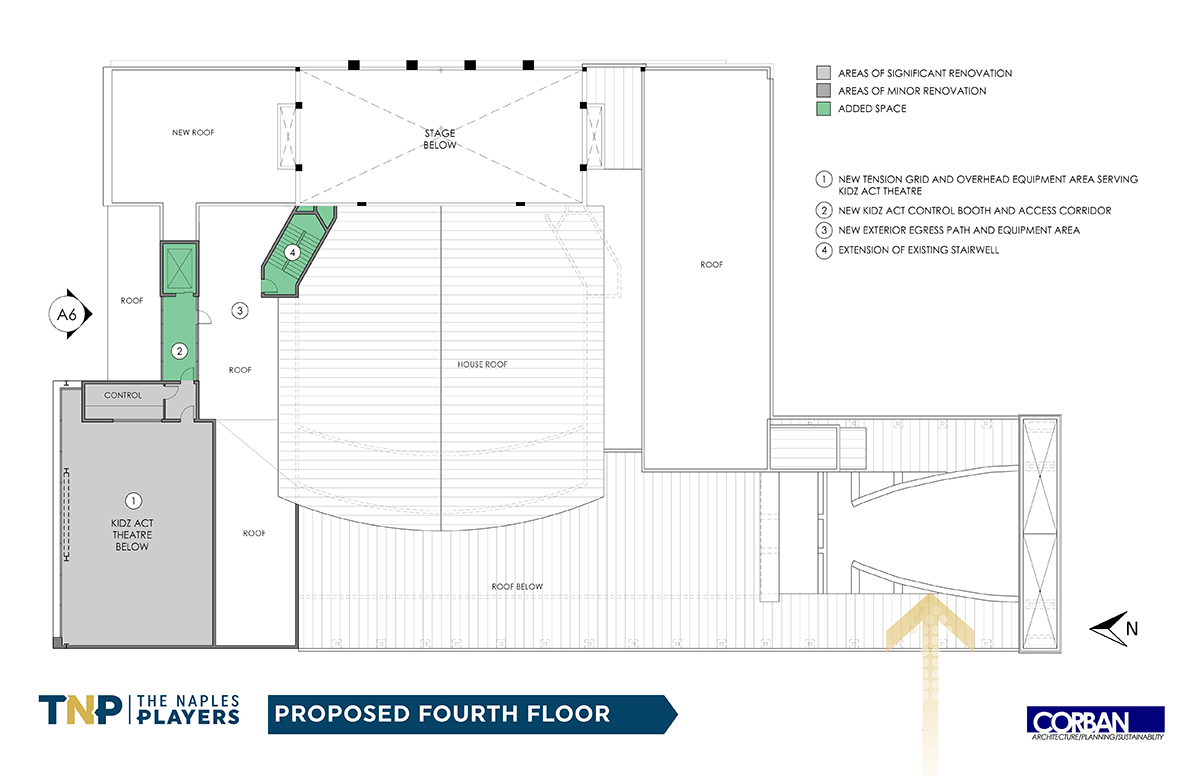 By reimagining and redeveloping existing space, and redesigning the North side of the theatre, we are able to add vital education, rehearsal, and performance spaces to fulfill our mission including:

Naples philanthropists Jay and Patty Baker graciously offered $2 million in matching gift funds – allowing donors to double their impact. With a goal of matching all funds by the end of December 2021, we are pleased to announce that we have met the generous match. However, your donations are still need to complete the project! 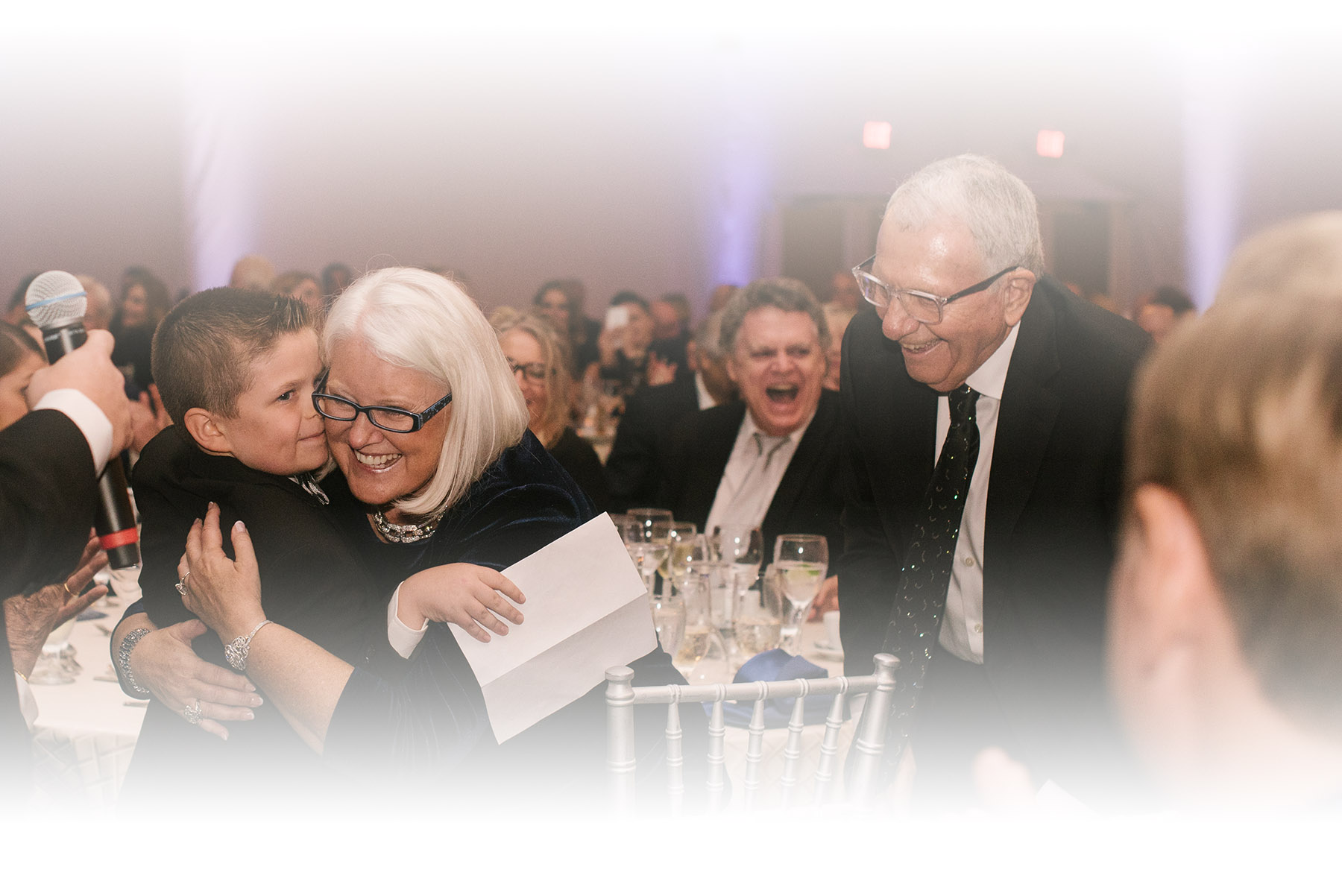 Patty and Jay Baker – who have named the main hall as “The Kizzie Theater” – hug TNP student Max Bogert after his performance at the 2019 Gala. 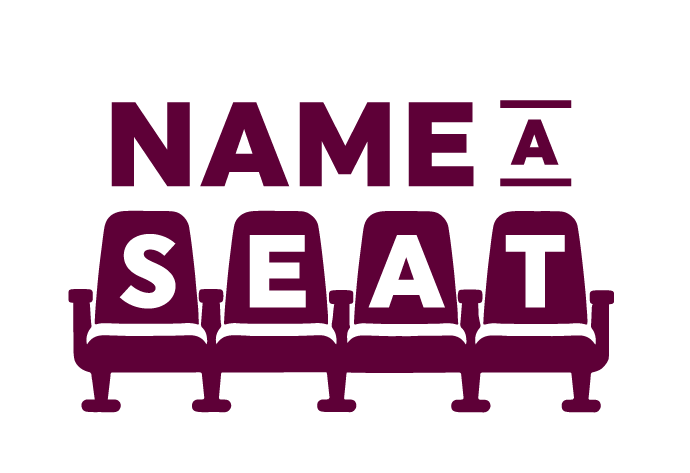 Commemorate your love of the theatre, or honor someone special, by making a gift to Name a Seat in one of the three new performing spaces at The Naples Players. Thousands of patrons, volunteers, and other guests will pass through the Kizzie Theatre, the Denny and Tanya Glass Educational Theatre, and the Price Studio Theatre, and your dedication will be evident to all – for years to come.

Seats are available now, with suggested donations ranging from $500-$2,500 per seat.

Thanks to the generosity of these early supporters, we have raised more than 80% of the construction cost of our new facility!

Several prominent naming opportunities are still available, beginning at $50,000. A pledge can be fulfilled over a period of four years. For more information, please contact:

Are you interested in speaking with someone about making a gift?

Please fill out the simple form below and we will be in contact with you at our soonest convenience.  Thank you for your interest in supporting the future of the arts.