We like to say we’re a family here at The Naples Players, but sometimes we have literal family ties within our organization – It comes with the territory when you’re a theatre for the community!

Henry Price recently sent a generous donation to The Naples Players (TNP) and CEO & Artistic Director, Bryce Alexander, decided to honor Mr. Price as the Official Sponsor of KidzAct for this upcoming season. Henry isn’t the only Price family member involved with The Naples Players… 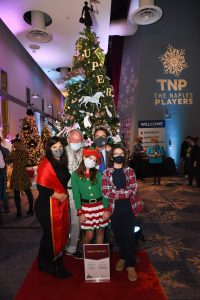 The Price Family at The TNP Trees & Teas Festival December 2020

Henry’s son, Craig Price, is the Director of TNP’s Community Education & Wellness Program which focuses on providing health and wellness benefits to our community through the arts. From high school transition programs for teenagers with disabilities to movement and improv classes for senior citizens with Parkinson’s – TNP’s classes and programs serve a wide variety of people in the community.

Craig’s father Henry is originally from Indianapolis, Indiana and has been coming to Naples for 27 years. He was involved in theatre in high school and college and loved it. With an extensive 50 year career as a trial lawyer, Henry is as much of a performer as his son. He says that his involvement with theatre at a young age “gave me the confidence to go around and be a trial lawyer,” and jokes that “the audiences in a courtroom are similar, but they can’t walk out!”

Henry’s son Craig also notes his father’s skill in the courtroom and links that success to his Dad’s early experiences with theatre:

“One of the things that I always admired about my dad – that I know he got from the theater – was his ability to litigate in the courtroom. He could be such an easy-going guy in life, but then I know when he went into the courtroom he would completely play another character. He was a tough litigator – always fighting for the little guys.”

After retiring and moving to Naples, Henry came to see and support The Naples Players’ performances. “The quality of the performances is very good. When I retired, we were able to do more financially. It’s a combination and extension of my involvement with that community and Craig’s involvement with the community. It’s a natural place to invest and I was fortunate enough to do very well as a trial lawyer. I have some invested assets to help, and the theatre is one of the places that I think is best to invest it.” 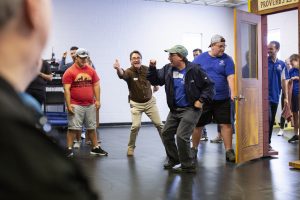 Henry also tested his performing skills with The Naples Players by auditioning for the role of Eliza’s Father in My Fair Lady. “It became very apparent that I couldn’t sing and Craig said, ‘why don’t you go up to my voice instructor?’ I went up for one lesson and the instructor told me ‘when you sing with me, you stay right in tune. But you can’t sing with a piano.’ We did a play in high school and I didn’t have a singing part… now I know why!”

As far as his feelings on his son’s career with The Naples Players, Henry “loves it – I’m very proud of him. He’s put his training to socially beneficial and important wellness uses. And he loves it, too – loves improv and working with the children because his two children have disabilities, as well.” Henry’s wife has Alzheimer’s and he noted that The Naples Players also works with Alzheimer’s support groups and caregivers. “It’s life-changing,” he added.

Additionally, Henry is amazed that Craig “has been able to carry on with improv classes virtually through COVID because it benefits human interaction that we’ve all missed through the pandemic. To do that successfully, and even build the number of classes he’s been able to offer, just amazes me. I couldn’t do improv – it’s a unique skill and his personality is perfectly suited.”

Respect is clearly mutual between father and son. Craig adds “I am so fortunate to have a father that is extremely supportive of my career in the theatre. He loves hearing how I am able to make a difference in the lives of kids and families. Plus, he is able to watch his grandchildren benefit from their experience at The Naples Players.”

As the KidzAct Season Sponsor, Henry says that “KidzAct does for all participants what theatre did for me. It brings a lot of people out of their shell to give them confidence in whatever career they choose.”

This dynamic duo is just another example of the ways The Naples Players is building community.