While the actors behind this winter’s Making God Laugh are not actually related, they care for one another as a family does — forging a strong relationship and bond through their mutual appreciation of one another and the theatre.

With the Making God Laugh cast comprised of returning performers, Director Jessica Walck has built a personal bond with each cast member over the years.

“Directing Jerry Rannow and Debi Garnett in Kalamazoo was a highlight in my directing career; as well as working with James Duggan on Don’t Dress for Dinner. His timing and physical comedy brought so much to that show,” Walck said. “Audiences talk about their love for these performances all the time, and it wouldn’t be possible without each actor’s chemistry onstage.”

“And working with JamieLynn Bucci is a dream come true for any director. She brings such richness to her characters—she is by far one of our finest actors. Her passion is almost tangible.”

Walck shares a connection to each of the performers, with some blossoming while performing herself.

James Duggan starred opposite Walck in Maple and Vine and worked with both her and JamieLynn Bucci on These Shining Lives. Duggan credits them and the show’s ensemble with elevating his abilities and his own opinion of himself.

“Volunteering with them and others at The Naples Players for over five years has allowed me to cultivate and enjoy relationships and connections made through sharing my passion for theatre.” Duggan isn’t the only one who feels grateful. His sentiment is repeated by other performers show after show.

Meanwhile, JamieLynn Bucci feels like she’s known everyone involved for years—and for the most part, she has.

“We spend holidays and birthdays together, we travel together,” Bucci said.

“The Naples Players not only fosters a community of creatives of all disciplines, but has also given me friends and family that will last a lifetime.”

The Naples Players also lends itself a fresh start for those new to the area. After retiring to Naples from a wildly successful career in television, Jerry Rannow continues following his love for the arts at the theater.

It was there he met his good friend Debi Garnett, a thirty-year Naples Player and Life Member. Jerry appreciates the time he spent opposite Debi in Kalamazoo and loves playing opposite her once again in Making God Laugh. 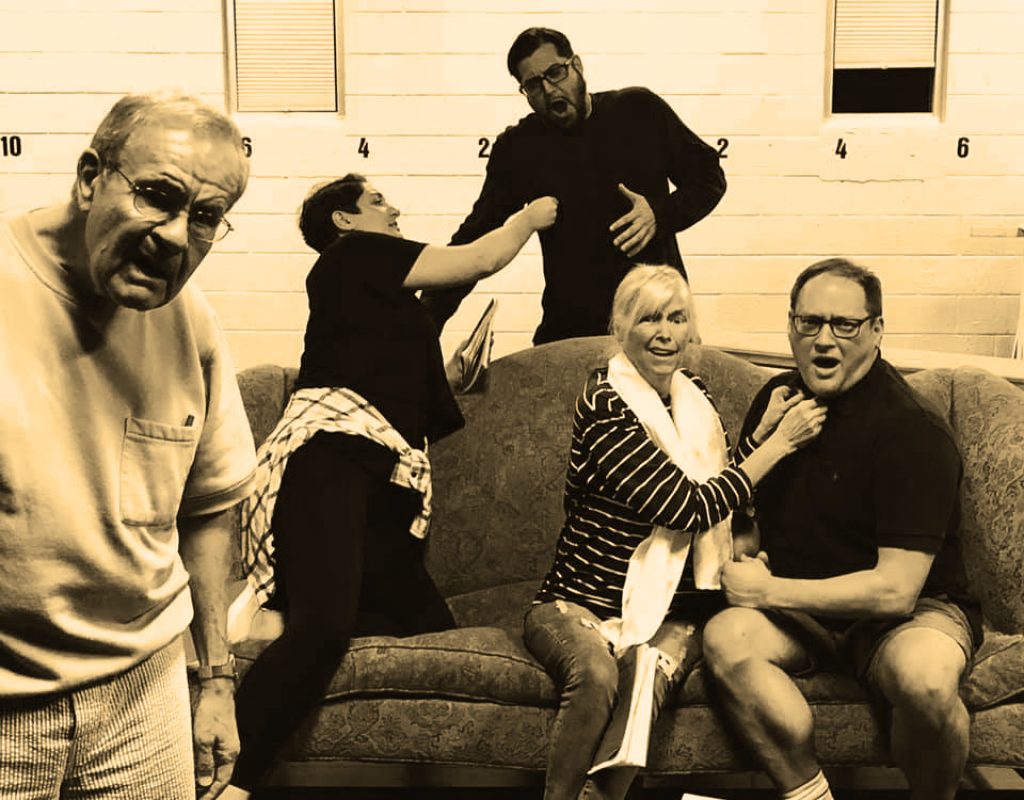 The cast of Making God Laugh during rehearsals.

Meanwhile, Debi Garnett’s rich history with the organization and its members informs her role as matriarch on and off the stage.

Garnett even held a leadership position on the organization’s Board of Directors as it built The Naples Players’ permanent home on 5th Avenue South.

“The Naples Players are my family of creative people—and through life’s ups and downs, they’re always there.”

Contrasting Garnett’s lengthy involvement with The Naples Players is David Shaffer, who plays the youngest sibling in Making God Laugh and who first took to The Naples Players’ stage less than a year ago during Guys and Dolls.

“Playing the role of Adelaide in Guys and Dolls was a dream come true,” Walck said. “But being able to play opposite David made it even more special. He is so giving and funny and loves what he is doing.”

Like their family characters in Making God Laugh, the cast spent the holidays together— except instead of celebrating, the actors were together for rehearsals five nights a week for several weeks before the show’s opening. They spend another four weeks together once the show opens. JamieLynn Bucci doesn’t mind, however.

“Creating art and telling a story is wonderful, but then also getting to do it with people you love? Incredible. The Naples Players is about so much more than great shows. It’s a great family, too.”

Interested in joining our TNP family of volunteers?  Learn how you can get involved!