Murder, mayhem and jazz: A musical tour through CHICAGO

Murder, mayhem and jazz: A musical tour through CHICAGO

“CHICAGO: THE A SHOW about two female murderers who turn their notoriety into celebrity, is set up as a 1920s vaudeville show, with each number introduced before it is performed. There’s a tango, a rag, a blues number filled with naughty innuendo and jazz tunes galore. There’s even a disappearing act — though unfortunately, in this case, the woman who disappears never returns. It’s sexy and sultry and entertaining. Composer John Kander and lyricist Fred Ebb “just had a real gift for writing not only dramatically appropriate music and lyrics, but ear worms that really stick with you,” says Charles Fornara, musical director for The Naples Players’ summer production.

The songs — “All That Jazz,” “Razzle Dazzle” and “Roxy” among them — “are in people’s consciousness,” Mr. Fornara says. “It’s a well-known score even for those who wouldn’t call themselves Broadway aficionados.”

The Oscar-winning movie version, which came out in 2002, just broadened its appeal, he adds. 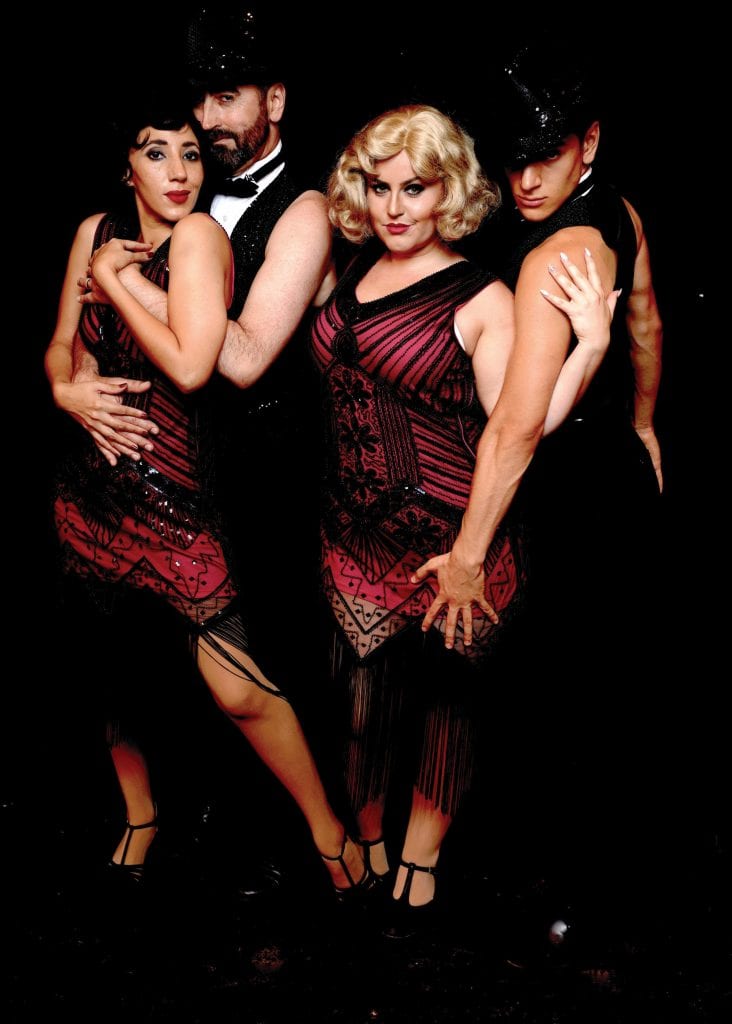 “Chicago” initially opened on Broadway in 1975. Its 1996 revival was even more successful, going on to become the longest-running Broadway revival.

In doing research about the show, Mr. Fornara’s wife, TNP director/choreographer Dawn Lebrecht Fornara, discovered that each musical number is based on a real-life historical figure. “Some are a combination of more than one real-life character, but they all have an historical basis,” Mr. Fornara says.

Matron “Mama” Morton, for example, is based on belter Sophie Tucker. In “Colored Lights: Forty Years of Words and, Music, Show Biz, Collaboration, and All That Jazz,” the oral history of Mr. Kander and Mr. Ebb’s long-time collaboration, Mr. Kander says many of the songs “are related to specific performers … (such as) Eddie Cantor and Bert Williams … ”

Joe Choomack, who plays tuba and upright bass, was “the first-call sub on Broadway,” he says. Joining him in the pit will be Paul Buzine on banjo, ukulele and mandolin, lead trumpeter Mark Pettey and lead reed player Jon Rhynard, all of whom played in the orchestra in the show’s last national tour.

The Fornaras are also directing the TNP KidzAct performance of the musical, set to run Aug. 3-5.

Because the musical is presented as a vaudeville show, we asked Mr. Fornara to talk about some of the specific songs from “Chicago: The Musical.”

The show opener is a sultry little number that grows in volume and brassiness. Velma (played by Jasmine Vizena) sings, “I’m gonna rouge my knees/and roll my stockings down.” She sings about a “whoopee spot/Where the gin is cold/ and the piano hot.”

“It sets the scene for us and sets the tone for the type of music we’re going to be hearing.”

In this number, the female prisoners of the Cook County Jail explain how their husbands or partners died. Each woman sings a verse, explaining how her crime occurred and justifying the murder. “He had it coming, he had it coming,” they all sing.

“The girls are fierce,” Mr. Fornara says. “It’s one of my favorite numbers in the show,” he adds, a sentiment he echoes for virtually every song.

“It’s justification for the murder they committed — except for the Hungarian girl, who can only say ‘Uh uh, not guilty’ in English. It’s a very dramatic number.”

‘When You’re Good to Mama’

In this suggestive blues number performed by the prison’s matron, “Mama” Morton, she sings about the favors she’ll do for the prisoners if they provide money or personal favors.

“She’s a real natural,” Mr. Fornara says of Lauren Miller, the actress who plays Mama with a deep, strong voice. “She’s perfect for the part … After the introduction to the song, she just stands there, soaking it up, before she does her number. Sometimes actors have difficulty doing nothing,” he adds. “But she does a wonderful job of playing the comedy and taking the necessary time in there … She’s a belter.”

One of the funniest songs in the show is a duet in which Velma and Mama bemoan the lack of class in people. It’s an ingenuous juxtaposition of beautiful music and vocal harmonizing with lyrics about how “there ain’t no gentlemen to open up the doors/There ain’t no ladies now, only pigs and whores.” The lyrics also include the phrases “pain in the ass” and “son of a bitch.”

“It’s the most ironic piece in the show,” says Mr. Fornara. “There’s absolutely crass language in it, while they’re bemoaning the lack of class. It’s just the height of irony. My favorite line is, ‘Jesus Christ, ain’t there no decency left?’ It makes me laugh every single time I hear it.”

‘We Both Reached for the Gun’

In this big production number, Roxy (Erica Dale Sample) sits on her lawyer’s lap like a ventriloquist’s dummy while he explains how her lover was killed. He of course, paints her as the innocent victim.

It’s a fast, jazzy tune, the kind coked-up dancers could do a manic Charleston to.

“It’s really catchy,” says Mr. Fornara. “That number is nuts! I would say it’s one of my favorites. It builds and builds and then it gets real slow, and then it goes to breakneck speed, ever-increasing in tempo and dynamic.”

Another big production number toward the end of the show, this one has Velma and Roxy’s lawyer explaining how he works in the courtroom: “Give ’em the old razzle dazzle/Razzle dazzle ’em.”

The number will be “quite the spectacle,” Mr. Fornara promises. “I think Dawn came up with a really successful realization of that song,” he says. “It’s one of my favorite numbers she’s ever done, I have to say.

“It takes place just before the courtroom scene. It’s literally like a circus. That’s exactly what (the lawyer) says, setting up the number: ‘You got nothing to worry about. It’s all a circus, kid. A three-ring circus.’”

A cynical view of justice and our legal system?

As is the entire show. ¦