Did you know The Naples Players relies on more than 650 local volunteers to run our performances? It’s true – and while it’s impossible to highlight them all, we want to take the opportunity to spotlight some of our super-star volunteers.

From acting to running crew to providing “family” meals for the cast, Papa Joe and Isabella Loiacono have put their heart and soul into every role they’ve played in our TNP volunteer family.  Joe’s love of performing in live theater since childhood was what initially attracted him to The Naples Players back in 2005. Originally from New York, the Loiaconos’ felt right at home once relocating to Naples and getting involved with TNP.

“From the very first day of being part of The Naples Players, this organization is the best I have ever been involved with. The professionalism and respect for each other is beyond expectation,” says Loiacono.

Joe has performed in over 18 shows, starting with playing Arvide Abernathy in TNP’s 2005 production of Guys & Dolls.  His experience during that first show solidified his spot (and his nickname) with the TNP family.

“After my first solo in Guys and Dolls, music director Charles Fornara came into the Green Room to compliment me and called me “Papa Joe” which has stuck all these years later. From that day on, everyone in the theater refers to me as Papa Joe,” he remarked.

Just last season, 14 years after his first go-around playing Abernathy, Joe reprised his role for our 2019 production of Guys & Dolls. 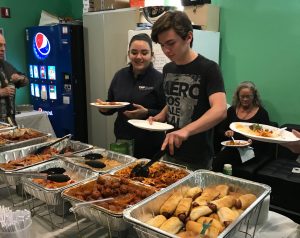 In addition to providing his talents on-stage, Joe also volunteers in the scene shop and backstage.  Not one for the spotlight, Isabella has volunteered as a dresser and backstage crew in addition to providing legendary “family meals” for the cast of every show Joe performs in.  Most recently, for our production of Bye Bye Birdie, the Loiaconos provided a delicious Italian meal for over 60 volunteers and staff, with homemade meatballs, baked ham, various pasta dishes, salad, rolls, two cakes and more.  These dinners give the hardworking cast and crew the opportunity to break bread and enjoy the sense of community that the Naples Players provides.

Papa Joe has volunteered 4,406 hours since 2005 and Isabella has served over 500 hours.  He is also an active advocate for encouraging others to get involved with the theatre.

“I’ve always recommended and introduced new people to join and participate in the theater. Also, I recommended parents to get their children involved in KidzAct, which is one of the finest programs in the country,” he commented.

The Loiaconos are a priceless addition to our volunteer family and we are grateful for the time, talent, and energy they have given to us over the years. We’re looking forward to continuing to see  Papa Joe on stage and enjoying his and Isabella’s family meals for years to come!  To learn more about getting involved with our volunteer opportunities, visit our Volunteer Page.