Having called Naples “home” since 2004, Denny & Tanya Glass have taken an active role in preserving and honoring the culture of Naples. Having served as the Board Chair of the Naples Historical Society, as well as The Naples Zoo and The Naples Players, Denny and Tanya have played a crucial role in helping the city’s prominent cultural organizations maintain their charm, while also investing in programs and facilities that will protect the future. 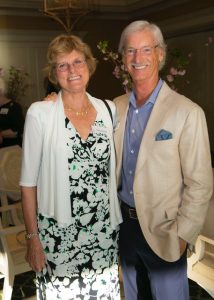 The result is the preservation of the theater’s charm, with definitive improvements to the theater’s interiors, acoustics, and programmatic initiatives – and, of course, the addition of “The Tanya and Denny Glass Educational Theater.” This reflects their strong support of children’s programs such as KidzAct which will benefit directly from the new Educational Theater.  But Denny & Tanya’s cultural influence in Naples is only part of the story…

A veteran of the U.S. Air Force and the retired founder and owner of Meridian Printing, a commercial art printing company based in Rhode Island, Denny is the past Chairman of Milton Holdings, a Dublin, Ireland holding company, running their U.S. Division.  He is past President of the Boards of Rocky Hill School, East Greenwich Public Library, Wannamoisett Country Club, Naples National Golf Club and Carnegie Abbey Golf Club. Denny is Chairman and Founder of the Ron Baliciki Scholarship Foundation and is Chairman of the Terra Cotta Invitational Golf Tournament and is Vice Chair of the Rhode Island Independence Trail Foundation. Most recently, Denny was named one of Gulfshore Life Magazine’s “Philanthropists of the Year” – a well-earned honor for both Denny & Tanya.

We’re proud to know and live alongside Denny & Tanya and thank them for all of the work they are doing to keep Naples a beautiful place to live.

Denny is just one example of the incredible veterans that make up our amazing community. We are thankful to each of them and their families for the sacrifices they have made for our freedoms.