We love our snowbird volunteers at The Naples Players (TNP) and we are thrilled when you bring your friends along to join our theatre family! Our January Volunteer of the Month, Jenny Gantlett, was introduced to volunteering at TNP by her friend Eileen Reynolds, who is actively involved on stage. Jenny was born in Yorkshire, England and comes to us by way of Canada and the Cayman Islands. 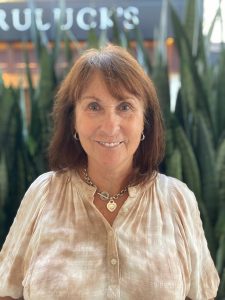 Jenny enjoyed a long career in elementary school in England and then taught in the Cayman Islands for thirteen years before retiring ten years ago.  “I knew I wanted to teach since I was a child. I was always making sure all the other little kids were in the right order in school. As a teacher, my favorite age was the five and six year olds – they’re just fresh out of home!”

Jenny’s two sons moved to Canada and started families there and she has five grandchildren.  “I was always home for all of their school holidays so I just had a ball with them. My home there is about an hour away from Lake Erie. The kids are all in their late teens and early twenties now, but Granny has come back in vogue because I have a pontoon boat and all three of my grandsons have their boating licenses!”

Volunteers join our theatre family for all sorts of reasons – some just see our building walking down 5th Avenue South, and others – like Jenny – have a friend lead the way! She says, “Eileen is the reason I started visiting Naples. We were friends in England and she came here to be a physiotherapist.  She’s been in lots of shows, especially the musicals. I started volunteering for Miracle on 34th Street when they were short a volunteer to work the spotlight. I was intimidated at first, but I just love working with the spotlights any time I can do it! I’ve done all of the Christmas shows for the past 6 years as well as Matilda with the children, and I worked backstage for Mary Poppins which was wonderful.”

Speaking of Mary Poppins, Jenny has a particularly fond memory of a large piece of furniture she was responsible for moving on and off stage (alongside fellow crew members). “It was a big chest with a bed that had to come out to a very specific mark on stage. It was one of the toughest things to do but it didn’t matter because we still had fun. I asked Cole (Butcher, Production Stage Manager) if we could smash it with a hammer on the last day. We couldn’t wait for that last show and they got some mallets from the scene shop for us to destroy it.”

While Jenny has done mostly spotlight work, she has also worked the light board, been a backstage dresser, and she did fly rail for the first time for Newsies JR. “I haven’t done ASM (Assistant Stage Manager) yet but I’m quite tempted to get up to that level! I don’t mind doing backstage work as long as I’m kept busy – I don’t like standing around. I’m going to do spotlight work for The Sound of Music this spring too.” Understandably, Jenny can only commit to so much time per production as she is still snowbirding from Canada.  “I keep in contact with Pamela (Larkin Caruso, Director of Volunteer Advancement) so I can plan to be down here for tech week and everything.”

Some of our volunteers thrive backstage and have no interest in appearing in any productions. “In high school I was in Dick Whittington, where I had a ten minute monologue with my cat (which I practiced for hours with my mother), and The Sleeping Beauty but that’s it. It’s marvelous what’s here – I think it’s 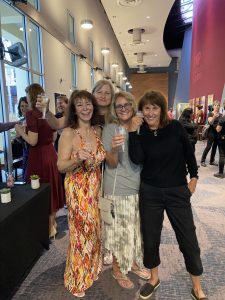 wonderful for the children. Those voices! Wow, those are some talented children. Some of the kids are in both Newsies and A Christmas Carol simultaneously. That is a full time commitment – and they have to fit their school work in too!”

As you can imagine, walking into a tech rehearsal and familiarizing yourself with your cues on the spotlight and the run of the show can be a challenging job!  “During Newsies, my one spot cue says “Roosevelt” and I’m not American so I’m going around the stage looking for this Roosevelt person with no luck.  Right as I was about to ask the question I realized – there’s a man with a black top hat on – of course that’s him!  It had been referenced earlier in the show but you’re concentrating on your spotlighting so you’re not really listening to the show. I just said, ‘I’m British – I don’t know all the American presidents!’”

The Naples Players is proud to be the place that you gather with your friends and we’re so happy to have our volunteers bring their own friends into our theatre family.  “I would not have even thought about it had it not been for Eileen. I wasn’t even a snowbird at the time. I’d been down for a few weeks during the winter and Eileen said they were short of volunteers. I’m glad she did because I’ve met quite a few friends. I would do more if I was here more. My son says it keeps me out of mischief!”

Congratulations to Jenny on being our January Volunteer of the Month. We are so grateful you followed your friend to Naples! 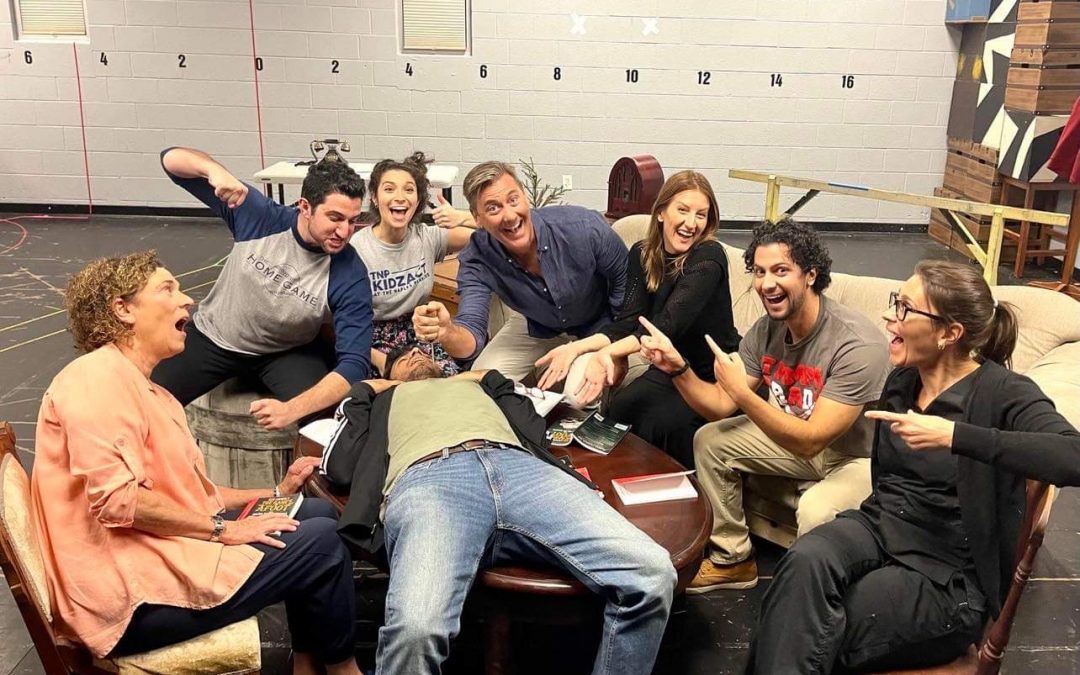 By: Lauren Speirs The Naples Players (TNP) welcomes all walks of life onto our team of dedicated...