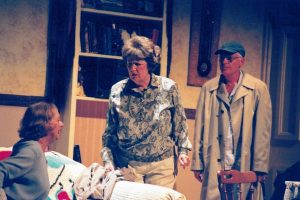 Joel in Ballroom at TNP

Joel Banow entertained his army base as a military disc-jockey while stationed in Korea. He enlisted after being drafted during his first semester at NYU, where he was studying broadcast television. After basic training, he entered engineering school to study photolithography.

“I learned about photography and printing,” he said. “And before my assignment, I got involved in the base’s theater.” Joel’s affinity for the arts landed him his first radio gig at his first assignment, a base in Kansas. “I played music by George Gershwin and Irving Berlin, emergency information, and ran the station overnight,” he said. “I took broadcasting classes at a nearby university and earned a military occupational specialty in broadcasting.”

This led Joel to an armed forces radio career in Seoul, Korea. After this post, he was assigned to a television station at Fort Monmouth, New Jersey. “We did public service announcements, broadcasts, film signals, classes and anything involving communications for the Signal Corps,” he said.

After a long and successful career in broadcasting, he is now retired and an active volunteer with The Naples Players. During The Naples Players’ production of White Christmas, Joel was an Audio Assistant.   For this volunteer role, he “solved problems, replaced batteries, and got the microphone battery packs all set for the actors.  My military training has carried through my entire life—from my broadcast career to giving back to my community.”

Joel is just one example of the incredible veterans that make up our amazing community. We are thankful to each of them and their families for the sacrifices they have made for our freedoms.