Growing up with The Naples Players…

Growing up with The Naples Players… 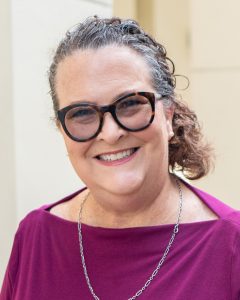 Kristin Cassidy is no stranger to The Naples Players.  In 1975, she was in TNP’s production of The King and I at Gulf View Middle School. “Back then, it was a real do-it-yourself environment with your mom making all your costumes – we hadn’t even moved into the Kon-Tiki (movie theater) yet.” After that, she didn’t grace our stage until 2001 when she appeared in Sweet Charity.

Kristin decided to audition for Sweet Charity to prove a point to her daughter Wylie.  At the time, Wylie was taking violin lessons but was terrified to perform.  “I wanted to show her that you don’t die when you go on stage and audition.  I convinced the (TNP) staff to let Wylie sit in on auditions.  To be honest, it never really worked – Wylie was perfectly happy volunteering backstage and eventually switched to the guitar!”

It had been such a long time since Kristin was involved in theatre that, when she auditioned for Sweet Charity, her then-husband didn’t even realize she acted.  With no babysitter, Kristin says that Wylie “grew up in this theater.  We used to joke that there was a ‘Wylie Cassidy Memorial Step’ because she would just take a nap on the stairs during rehearsals.”

Kristin went to Emory College and did theatre all throughout.  Afterwards, she acted in a few shows in Atlanta at the Neighborhood Playhouse.  She laughs about appearing in A Chorus Line where, “they made me take the taps off my shoes and just wear character shoes…I do a great dance face – you would think I was killing it!”

Soon enough, Kristin realized she needed a ‘real job.’  “I call it the washer-dryer gene.  I realized I wanted to be able to afford a washer-dryer! I became a restaurant manager and a cook.  It’s like being on a pirate ship – a lot like theatre.  There’s a lot that happens backstage that no one knows about!”

Kristin got married, had Wylie, and moved back home to Naples, where she started a successful career in real estate.  Initially, she was an office manager for Premier Sotheby’s Realty before becoming an agent.  When she started this new career, one of the other agents in her office was cast in something at TNP and said, “you should audition and get back into theatre!”

Kristin found that The Naples Players is very different from her Gulf View Middle School Experience.  “The professional staff here are just amazing – the miracles that Dot (Auchmoody) and the costume shop creates are mind boggling. We look great, we sound great…and the orchestra, my goodness!”

With a daughter who also volunteered long term at TNP Kristin is impressed with all the opportunities for young people at the theater now.  “I’m so thrilled with all the backstage programs here now.  There are stage manager classes now and you can really expand your opportunities in the theater.  It’s amazing to sing and dance but encouraging the kids to get the backstage skills and experience allows them to make a living from theater outside of performing.” 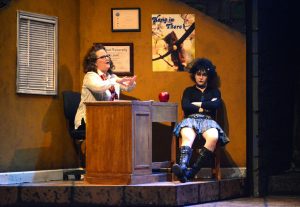 Kristin Cassidy in She Kills Monsters

When she can’t be onstage, Kristin loves being a dresser backstage.  “As an actor, you’re really able to think along with the person you’re dressing.  You know when it’s time to shut up or when it’s time to hound them.  I dressed Elizabeth Marcantonio for Gypsy and I drove her crazy! She had a lot to put on. I would stand behind her chair and say, ‘do you want to get ready now?’…then the ten minute call would come…’how about now?!’”

Kristin says she “loves doing the shows.  That’s the thing that I love – I can have a day job and still do theatre.  These people practically raised my daughter.  It’s a truly spectacular thing to be a part of.”